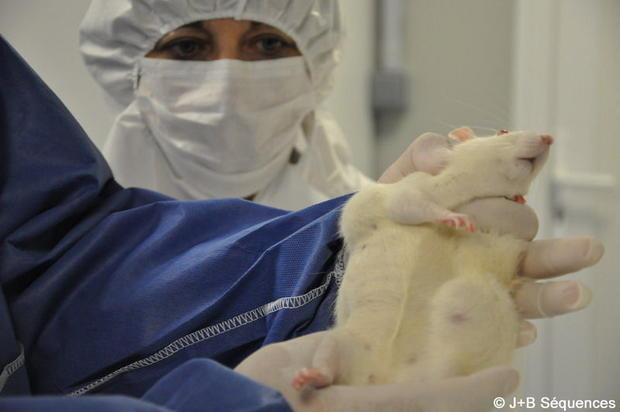 from activistpost.com: Scientists from around the world have united to condemn the
retraction by the editor of the Elsevier journal Food and Chemical
Toxicology (FCT) of the pioneering study on genetically modified (GM)
maize and Roundup herbicide, conducted by Prof Gilles-Eric Séralini and
his team at the University of Caen, France.

The study found that rats fed the GM maize and/or low levels of Roundup
in their diet suffered severe organ damage, particularly to the liver,
kidneys and pituitary gland. Additional unexpected observations were
higher rates of large tumours and mortality in most treatment groups.

A group of 41 scientists and biosafety experts have signed a public
statement condemning the retraction as an apparent “act of scientific
censorship” and demanding that the journal reinstate the study, which
they say contains findings of potentially critical importance to public
health.

The group is inviting scientists to sign on to the statement, which is hosted at the new website, endsciencecensorship.org.

On the website, several of the signatory scientists explain the study
and its findings for the non-specialist, as well as providing a detailed
examination of the reasons given for the retraction.

The public is invited to support the initiative by demanding that the
German government release the industry toxicology studies on glyphosate,
the main chemical ingredient of Roundup. Though these studies form the
basis of the EU approval of all glyphosate herbicides, they are kept
secret and are held by the German government.

Séralini’s study passed peer review with minor revisions and was
published by FCT in September 2012. The paper was subjected to a
sustained campaign of attack by pro-GM scientists, many of whom had
undisclosed links to the GM crop industry or with government agencies
that had previously approved this or other GM crops as safe.

FCT’s editor, Dr A. Wallace Hayes, retracted the paper over a year after
it was published. The decision came after a nontransparent, second
review by a panel of unnamed persons of unknown professional competence
and with undisclosed potential conflicts of interest.

According to the Committee on Publication Ethics (COPE), of which FCT is
a member, retraction of a paper is reserved for cases of misconduct,
error, redundant publication or plagiarism, and unethical research.

None of these criteria apply to the Séralini paper, as Dr Hayes
conceded. Dr Hayes stated that the retraction was solely based on the
“inconclusive” nature of the tumours and mortality outcomes, based on
the relatively low number of animals and the strain of rat used,[6]
which is reportedly prone to spontaneous tumours. Dr Hayes wrote: “No
definitive conclusions could be drawn from the inconclusive data”.[7]

However, the scientists say that the lack of “definitive conclusions” is
an invalid and unprecedented reason for retracting a study, since many
scientific papers contain inconclusive findings.

In addition, the main findings of the Séralini study were severe organ
toxicity in the animals fed GM maize and/or Roundup. Yet these findings,
which are statistically significant and as conclusive as it is possible
for such results to be, have also been erased, due to the presence of
some alleged “inconclusive” findings in the paper.

Just
months before the retraction was announced, Dr Richard E. Goodman, a
former Monsanto scientist, was appointed to a newly created editorial
position in biotechnology at FCT. Soon after Goodman’s appointment, a
second paper challenging the safety of GM crop technology was withdrawn
from FCT[8] (though it was immediately re-published in another
journal).[9]

In a separate initiative, over 860 scientists worldwide have condemned
the retraction in an open letter to FCT and have announced that they
will boycott Elsevier journals.[10]

Scientists’ comments on the retraction

“This retraction lacks any scientific basis. If the lack of 'definitive
conclusions' were a valid reason for retraction, our libraries would be
almost empty, as I have yet to see a study that yielded results of
‘definitive’ conclusiveness.

“In fact, the surprising revelation of FCT’s highly irregular
post-publication evaluation process is that Séralini’s study would
appear to be flawless. In response to massive, orchestrated pressure
from industry-aligned circles, a secret group of unknown people was set
up with the sole aim of finding weaknesses in the study to allow it to
be shot down and retracted (we have no verifiable evidence that these
people were experts in the relevant fields of science or in anything,
for that matter). Yet after trying hard for one full year, all they
could come up with was a lack of ‘definitive conclusions'.

“To me, this is a confirmation of the quality of the study and the
integrity of the researchers, as very few studies would pass such an
extraordinary evaluation process.”

“Based on the science presented in the Séralini paper, it is extremely
difficult to see any cause for retraction, especially since the
journal’s editor, Dr A. Wallace Hayes, only highlighted two of several
aspects of the paper – the tumours and mortality rates – as
‘inconclusive’.

“This suggests that even in the editor’s view, the bulk of the findings –
the severe organ toxicity in rats fed GM maize and low levels of
Roundup – must be valid. To retract the whole paper based on the
perceived inconclusiveness of just a proportion of the data presented is
scientifically untenable.

“In deciding to retract the paper, the editor is not being true to the
science. I conclude that the retraction must be due to other,
non-scientific reasons.”

“The editor of the journal claimed that the reason for retraction of the
Séralini study was that ‘no definitive conclusions can be reached’. As a
scientist, I can assure you that if this were a valid reason for
retracting a publication, a large fraction of the scientific literature
would not exist.

“Before the retraction, a former Monsanto scientist was brought into the
journal as biotechnology editor. Therefore, a combination of intense
pressure from scientists and a new pro-industry editor led to the
elimination of an exceptionally important study.

“I am convinced that there is significant evidence, like that presented
by Séralini, that some GM foods are hazardous to human health. In order
for data supporting this possibility to enter public discourse,
scientists must place their ethical responsibilities above corporate
profits and cease their continual assault on the science relating to GM
safety. The protection of scientists’ right to publish their findings
without censorship or retribution must be preserved.”