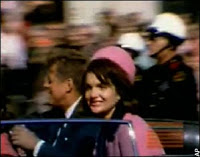 from washington post: In a collision of 21st-century science and decades-old conspiracy theories, a research team that includes a former top FBI scientist is challenging the bullet analysis used by the government to conclude that Lee Harvey Oswald alone shot the two bullets that struck and killed President John F. Kennedy in 1963.

The "evidence used to rule out a second assassin is fundamentally flawed," concludes a new article in the Annals of Applied Statistics written by former FBI lab metallurgist William A. Tobin and Texas A&M University researchers Cliff Spiegelman and William D. James.

The researchers' re-analysis involved new statistical calculations and a modern chemical analysis of bullets from the same batch Oswald is purported to have used. They reached no conclusion about whether more than one gunman was involved, but urged that authorities conduct a new and complete forensic re-analysis of the five bullet fragments left from the assassination in Dallas.

"Given the significance and impact of the JFK assassination, it is scientifically desirable for the evidentiary fragments to be re-analyzed," the researchers said.

Tobin was the FBI lab's chief metallurgy expert for more than two decades. He analyzed metal evidence in major cases that included the 1995 Oklahoma City bombing and the 1996 explosion of TWA Flight 800 off Long Island.