from raw story: A team of nine scientists have unearthed startling data from dust gathered in the days and weeks after the World Trade Center towers collapsed on 9/11. They discovered that scattered throughout the dust samples were red and gray chips of ‘active thermitic material‘, or an un-reacted pyrotechnic explosive.

Thermite is used in steel welding, fireworks shows, and hand grenades. It is the combination of a metal powder and a metal oxide which produce a reaction known for extremely high temperatures focused in a very small area for a short period of time. The ‘active thermitic material’ discovered in the World Trade Center dust was a combination of elemental aluminum and iron oxide, and is a form of thermite known as ‘nano-structured super-thermite’.

“These observations reminded us of nano-thermite fabricated at the Lawrence Livermore National Laboratory and elsewhere; available papers describe this material as an intimate mixture of UFG [Ultra-fine grain] aluminum and iron oxide in nano-thermite composites to form pyrotechnics or explosives. Commercially available thermite behaves as an incendiary when ignited, but when the ingredients are ultra-fine grain and are intimately mixed, this ‘nano-thermite’ reacts very rapidly, even explosively, and is sometimes referred to as ‘super-thermite’,” the report explains.

The full article in The Open Chemical Physics Journal can be found here. 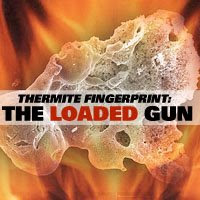 Some of the authors of the paper have lost their jobs at universities and chemistry labs for their outspoken breakdown of what happened at the World Trade Center on 9/11. Kevin Ryan lost his job as a lab director after writing a letter to the National Institute for Standards and Technology (NIST was conducting an investigation into 9/11 at the time) challenging the common theory that burning jet fuel weakened the steel supports holding up the 110-story skyscrapers. Ryan claims that the owner of his laboratory subsidiary “was the company that certified the steel components used in the construction of the WTC buildings,” according to the South Bend Tribune. Dr. Steven E. Jones, a physicist at Brigham Young University, presented a paper in 2005 discussing alternative theories to the commonly accepted ‘jet fuel’ reasoning. In September 2006 he was placed on paid administrative leave and his paper was removed from the BYU database.

Jones has told Visibility911.com, “In short, the paper explodes the official story that ‘no evidence’ exists for explosive/pyrotechnic materials in the WTC buildings.”

Parts of the report mention other studies being conducted by the scientists that will come out soon.

related: somebody, please! ‘rescue me’ from 9/11 conspiracy theories!