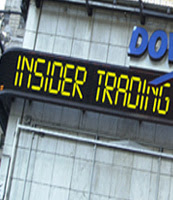 from reuters: A senior Securities and Exchange Commission official said on Thursday insider trading appeared to be "rampant" among Wall Street professionals and the agency has formed a working group to focus on it.

"I am disappointed in the number of cases we are seeing by people who make an abundant livelihood in the market that they are sort of abusing by insider trading," Thomsen said, referring to cases already brought against professionals this year.

Insider trading "appears to be rampant" among Wall Street securities professionals, she added.