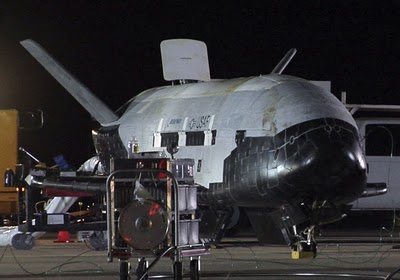 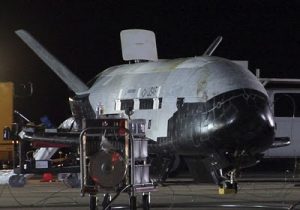 from the register: The US Air Force is set to launch its second X-37B miniature unmanned spaceplane - the type famously dubbed a "secret space warplane" by the Iranian government - on Friday. The USAF Rapid Capabilities Office, which oversees the X-37B programme, says that the second Orbital Test Vehicle mission (OTV-2) will lift off from Cape Canaveral Air Force Station atop an Atlas V rocket, just as the preceding OTV-1 mission did, and will deploy the second of two X-37B spaceplanes currently owned by the airforce. The launch window will open at 3:39pm EST.

Once in orbit the X-37B deploys a solar panel array, unlike its bigger cousin the Space Shuttle which uses fuel cells for electrical power. Thus the little robot spaceplane can remain in orbit for much longer periods unsupported before re-entering the atmosphere to make a runway landing. The previous OTV-1 mission, carrying a payload which remains secret, lasted 224 days and ended with a successful landing at the Vandenberg military space base in California. As yet the USAF has not revealed the planned duration of the OTV-2 mission launching tomorrow, and again details of the payload are not being revealed.