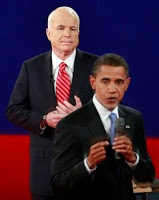 from danger room: Last night's debate was supposed to be all about the economy, or about who had the scummier friends. But more than a few rounds of the showdown in Nashville were devoted to military matters -- specifically, on how best to wage a counterinsurgency in Afghanistan and Pakistan. John McCain repeated his call to broadly use the Iraq blueprint on the Afghan front:

"Now, General Petraeus had a strategy, the same strategy -- very, very different, because of the conditions and the situation -- but the same fundamental strategy that succeeded in Iraq. And that is to get the support of the people."

Obama didn't sound all that much different. He put a bit more emphasis on pouring more troops into Afghanistan, "because our bases and outposts are now targets for more aggressive... Taliban." He talked about "eliminat[ing] some of the drug trafficking that's funding terrorism" there. And he said that Afghanistan's political leaders had to be brought into the process. "You are going to have to do better by your people in order for us to gain the popular support that's necessary," Obama recently told Afghan president Hamid Karzai.

In essence, both Obama and McCain were quoting from the military's now-famous counterinsurgency manual, which talks about the people being the center of gravity for these sorts of campaigns. The old-style bombs-and-bullets operations have their place, of course. But the key to stabilizing a country is allowing the people to lead "normal, social, economic, political lives," as McCain noted.

One could even argue that last night represented kind of a capstone victory for the U.S. military's cadre of counterinsurgency-focused thinkers. For years, they've been clashing with the armed forces' more traditional strategists, who think the future of conflict lies in big wars with conventional adversaries. In the debate, both Obama and McCain passed up on the chance to declare a new Cold War with Russia. They were too focused on the insurgency in Afghanistan and Pakistan to bother.

mccain linked to iran-contra, ‘nazi collaborators,’ & ‘right-wing death squads’
from newsbusters: On Tuesday, an Associated Press article featured on MSNBC.com and briefly as a top headline on the popular internet homepage MSN.com was titled: "McCain linked to group in Iran-Contra case." The subtitle read: "Organization had ties to former Nazi collaborators, right-wing death squads." The article attacked a group founded by retired U.S. General John Singlaub: "The U.S. Council for World Freedom was part of an international organization linked to former Nazi collaborators and ultra-right-wing death squads in Central America. The group was dedicated to stamping out communism around the globe." The AP appears to be getting its story tips from the Obama campaign, as Boston Globe deputy national political editor, Foon Rhee, reported: "The Obama camp today is sending around reports on Singlaub, founder of the US Council for World Freedom, which was involved in the Iran-Contra scandal during the mid-1980s and was criticized for supposed links to Nazi collaborators and right-wing death squads in Central America." The AP article justified reporting on the tenuous McCain connection by explaining: "McCain's ties are facing renewed scrutiny after his campaign criticized Barack Obama for his link to a former radical who engaged in violent acts 40 years ago."

jerome corsi, anti-obama author, detained in kenya
from times online: A leading American neo-conservative author has been detained by immigration authorities in Kenya as he tried to launch a book smearing Barack Obama. Jerome Corsi, of Swift Boat Veterans for Truth fame, was this morning being held after failing to reckon with Obamamania. He had been planning to launch his book, entitled 'Obama Nation: Leftist Politics and the Cult of Personality', before travelling to one of Nairobi’s slums to donate money to the Senator’s half-brother George, who was found living in squalid conditions two months ago. 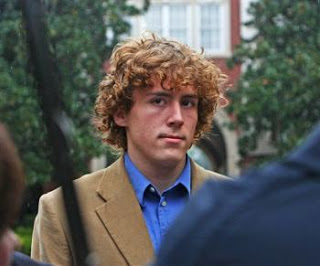 from threat level: David Kernell, the 20-year-old Tennessee student who has been under suspicion for allegedly obtaining unauthorized access into Alaska Gov. Sarah Palin's private Yahoo e-mail account, has been indicted by a federal grand jury in Tennessee. According to a Justice Department spokeswoman, the grand jury returned the sealed indictment Tuesday afternoon, and Kernell turned himself into the FBI this morning, after which the indictment was unsealed. Kernell was arraigned in Tennessee today, and a tentative trial date has been set for December 16. Kernell, who is the son of Tennessee Democratic state representative Mike Kernell, is indicted on only one felony count of violating the Computer Fraud and Abuse Act, but the indictment mentions an additional statute, the Stored Communications Act. 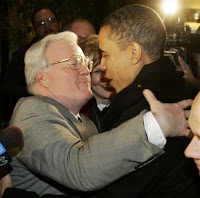 from washington times: (Editor's note: The original version of this article has been corrected. The office of Larry D. Walsh was not raided.)

The FBI is investigating a former Illinois state senator who is a poker-playing buddy of Democratic presidential candidate Sen. Barack Obama. According to Chicago authorities, the FBI visited the offices in Joliet, Ill., of a Will County auditor to ask questions about Larry Walsh, a longtime friend of Mr. Obama's, and his chief of staff Matt Ryan. Mr. Walsh, who served in the Illinois Senate from 1997 to 2005, was endorsed by Mr. Obama in his county executive election bid. With the support of some of Mr. Obama's U.S. Senate volunteers, he easily defeated incumbent Republican Joseph Mikan. Will County auditor Steve Weber confirmed that his office had been asked by the FBI to assist in an investigation, but he did not elaborate on the specifics. Two FBI agents out of Chicago reportedly spent more than an hour in the Will County offices on Wednesday morning.

nader challenges obama & mccain to visit mosque before elections
from votenader.org: Ralph Nader will be holding a news conference Friday, October 3 at 11 a.m. outside the Grand Mosque Islamic Center in Washington DC where he will challenge Sens. Barack Obama and John McCain to visit a mosque, like they have churches and synagogues, before the November election as a show of respect and tolerance. Nader recently wrote a letter to Obama and McCain asking the men to act on such a request.

“As you know, discriminatory acts against Muslim-Americans have soared in recent years. They emanate from stereotyping, ethnic profiling, bigotry and, unfortunately, actions by some local, state & federal officials. The documentation is broad and deep on this unfortunate situation that spreads fear and anxiety among millions of Muslim-Americans… Out of respect for Muslim-Americans who have served in all the dimensions of our society from the professions to the armed forces, from the trades to the arts and sciences, from blue collar to white collar work, while raising their children to surpass their own achievements as befits the American horizon, we urge you to visit a Mosque before November 4, 2008.”

The letter is published in its entirety [here].

satire video: gunman kills 15 potential swing voters
from the onion: The Obama campaign is cautiously optimistic after initial reports indicated that most of the people killed were registered Republicans.