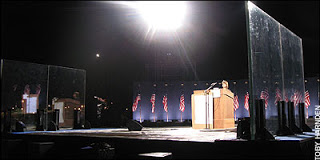 the obamessiah is going to produce profound disillusion

from telegraph: There is a video clip running on YouTube at the moment which shows a black woman moved nearly to tears at an Obama rally, telling a television interviewer that all her problems will be at an end when he is elected president. She won't have to worry anymore about putting gas in her car or paying her mortgage because "he will help me". It would be easy to find this absurd - the blind faith of an unsophisticated voter who has clearly mistaken Barack Obama for Jesus - but in truth it is both sad and alarming... What will this mean for the future? What if, as will almost certainly be the case, the great deliverance fails to deliver? The disillusion and sense of betrayal may create divisions in American society that will be greater and deeper than any we have seen for a generation. The sense of hopelessness and bitter disappointment may well be - as Americans say - toxic. Then again, maybe American politics will simply get the grown-up message that no one mortal is the final answer: that the fulfilment of the American dream must always lie within the individual and not with the government. To be fair, Obama himself suggests this when he tells the crowds, "It's not about me - it's about you."

an open letter to obama: between hope & reality
from ralph nader: Dear Senator Obama, In your nearly two-year presidential campaign, the words "hope and change," "change and hope" have been your trademark declarations. Yet there is an asymmetry between those objectives and your political character that succumbs to contrary centers of power that want not "hope and change" but the continuation of the power-entrenched status quo. Far more than Senator McCain, you have received enormous, unprecedented contributions from corporate interests, Wall Street interests and, most interestingly, big corporate law firm attorneys. Never before has a Democratic nominee for President achieved this supremacy over his Republican counterpart. Why, apart from your unconditional vote for the $700 billion Wall Street bailout, are these large corporate interests investing so much in Senator Obama? Could it be that in your state Senate record, your U.S. Senate record and your presidential campaign record (favoring nuclear power, coal plants, offshore oil drilling, corporate subsidies including the 1872 Mining Act and avoiding any comprehensive program to crack down on the corporate crime wave and the bloated, wasteful military budget, for example) you have shown that you are their man?

now that obama has won... there is no excuse
from george washington: Now that a Democrat has been elected president, the Democrats in Congress have no excuse. They can no longer pretend that they have to "hold back" to win the election.

They have no excuse to delay war crimes charges against Bush, Cheney and company for Iraq.

They have no excuse to delay war crimes charges for torture.

They have no excuse to delay criminal charges for spying on Americans.

They have no excuse to delay criminal charges for 9/11.

Now is not the time for Democratic machine politics. Now is the time to implement true American values - cherished across the political aisle - of liberty and justice.

There can be no liberty in America unless the tyrants who have tried to imprison us and enslave us are prosecuted.

There can be no justice in America unless the high and mighty are held accountable for their actions.

Obama is a former Constitutional law professor. He knows the value of the Constitution and the rule of law. He promised during his campaign to curb the unconstitutional practices of the executive branch. But that is not enough. Because if the tyrants in both parties who have trampled on the vision of the founding fathers are not held accountable, then future tyrants will learn that they can get away with it, also. Now that Obama has won, there is no excuse. Those who have trampled on our country and our people must be held to account for the whole world and future generations to see.

from telegraph: On either side of the lectern is a large bullet proof glass screen protecting him from any shots fired by would-be assassins who might be positioned in skyscrapers overlooking the venue.

from danger room: As the ballots were cast yesterday, Jim Garamone of American Forces Press Service reported that Pentagon officials were already making room for the president-elect's transition team. This is the first wartime transition of power since the Vietnam War, and Defense Secretary Robert Gates has created a task force to ensure a smooth transition. Among other things, Garamone reports that Gates was surveying top political appointees within the building to see who might be willing to stick around until their successors can take over. He quotes Pentagon flack Bryan Whitman as saying: “There are a number of people that have given an indication that if they were asked to stay on and serve as a bridge after Jan. 20 until their replacement is on board, they would do so.” The Washington Post adds that Obama's advisers are now "debating whether to ask Defense Secretary Robert M. Gates to stay on, to allow planning for a withdrawal from Iraq to begin as soon as possible." Keeping Gates on might be a common-sense move. As Noah wrote here back in June: "[S]ince Gates has been brought in, things have started to turn. Budgets have begun to return to reality. People lose their jobs when they can't do them right. Experts in their fields are being heard. Sound policy is often trumping adherence to political orthodoxy. And the Pentagon is slowly, slowly starting to focus on today's wars in Afghanistan and Iraq." Former Navy Secretary Richard Danzig, one of Obama's top national security advisers and another possible candidate for SecDef, seems to agree. We'll keep a close eye on this as Obama assembles the new administration.

what obama means to america's 'information operations'
from danger room: A story about Barack Obama. In late January, shortly after the Iowa caucuses, I found myself at a conference, sitting next to a flag-level officer. He was an unapologetic Christian conservative -- sent his kid to Jerry Falwell's Liberty University, saw the fight against terror as a religious war. So he was not exactly inclined to say nice things about a Democrat running for president. Yet here the officer was, praising Obama. You see, this officer oversaw special operations work around the Horn of Africa and the Middle East. Sensitive stuff, that requires delicate negotiations. And already, just as one among many candidates for president, Obama was making this officer's job easier. Officials in other governments were more willing to provide his troops access to their countries. Foreign intelligence services were more willing to share information. One of the themes of this conference was information operations, or "IO" - how the U.S. can influence others around the world. This officer and other conference-goers were disgusted, by how badly the U.S. had bungled this war of ideas, and allowed opinions about America to sink so low. Candidate Obama, the group concluded, was the best IO campaign America had had in years. Allies were more ready to listen. Enemies' narratives about America were being undercut. So what happens to our standing in the world, now that the candidate is President-elect? Obviously, negative views about America aren't going to change overnight - if they change at all. For instance, some of the instant reactions from the electronic version of the Arab "street" seem decidedly undecided about a president with the middle name Hussein. But judging from the giddy reactions from Kabul to Caracas, America's most powerful IO campaign gets even stronger, when Barack Obama moves from the campaign trail to the White House.

bush signs order to ease switch to next president 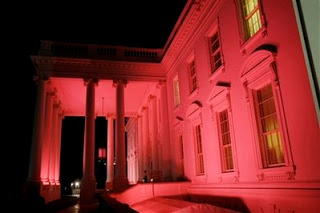 from ap: A piece of paper that President Bush signed Thursday [Oct9] helps ease his way out of the White House when his term ends and clears the way for his successor.

For seven years and nearly nine months, he has signed virtually every memo or order or piece of legislation imaginable. He even vetoed a few bills, but the directive he put his name on Thursday was one that few talk very much about. Basically, it's the executive order that turns the keys to the White House over to whomever is elected president on Nov. 4.

A little publicized truth is that Washington can't wait until inauguration day next Jan. 20 to figure out the details of a transition to a new presidency. Both Barack Obama and John McCain already have designated officials to oversee such a transition once the outcome of the election is known. The transition team of the winning candidate will set up procedures for selecting key personnel and making policy decisions in the 11 weeks between the new president takes office.

White House press secretary Dana Perino said Bush's order was designed to help coordinate efforts already under way to ensure a seamless transition. She said Bush wants to make sure the next president's team has everything it needs to hit the ground running.

"This is especially important as our nation is fighting a war, dealing with a financial crisis and working to protect ourselves from future terrorist attacks," Perino said.

Bush's order established a presidential transitional coordinating council whose members include top officials from the intelligence and national security community, as well as the White House budget office, the Justice Department, Homeland Security and other agencies. Even before the election, they will work with the Obama and McCain campaigns "on an equal basis and without regard for party affiliation," the order directs.

"The council shall assist the major party candidates and the president-elect by making every reasonable effort to facilitate the transition between administrations," Bush's order said.