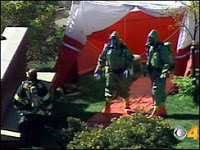 from washington times: Two of Sen. John McCain's presidential campaign offices were evacuated Thursday after receiving suspicious letters, one of which contained an unidentified white powder. A government official said a letter sent to the office of the presumptive Republican presidential nominee near Denver contained powder, but was being treated as a hoax and was thought to have been sent by an inmate at a nearby jail in Arapahoe County. A letter sent to the office in New Hampshire did not contain powder, but aroused suspicions of staffers who were jittery after the Denver-area office received its letter. Secret Service spokesman Eric Zahren said the two letters are unrelated. Despite the likelihood of a hoax, staffers at all the Arizona Republican's campaign offices nationwide were told not to open letters. "Let's be cautious and not open mail tomorrow unless we clearly know the source," according to a campaign e-mail that was sent to staff members and obtained by The Washington Times. "Let's see what comes of this."

from conservative pulse: According to the Politico, Ralph Nader is telling people that he fully expects that Barack Obama will name Hillary Clinton as his running-mate in the next few days. Nader suggests that Obama can’t really pick anyone else, as all other available choices are uninspiring empty suits. “I don’t think he’s that dumb,” said Nader, commenting on widespread speculation that Obama’s choices are down to Sens. Joe Biden, Evan Bayh, or Virginia Gov. Tim Kaine. The smart pick, according to Nader, is Hillary Rodham Clinton. Nader phoned into Politico Tuesday afternoon to offer his prediction that a surprise nod to Clinton is actually what Obama has in store—never mind the talk of mistrust between the Clintons and Obama. “He just has to swallow hard and do what JFK did” in picking rival Lyndon Johnson in 1960, said the liberal activist and maverick presidential candidate.

many states abandoning touch screen voting
from raw replay: CBS’ Tony Guida reported that as the U.S. prepares for the upcoming presidential election, many states are abandoning the electronic touch screen ballots that have caused significant problems in the past. Rep. Rush Holt said that one third of ballots cast will be unverifiable. This video is from CBS’ Evening News, broadcast August 17, 2008.