from governor.mo.gov: Gov. Matt Blunt today issued the following statement on news reports that have exposed plans by U.S. Senator Barack Obama to use Missouri law enforcement to threaten and intimidate his critics.

“What Senator Obama and his helpers are doing is scandalous beyond words, the party that claims to be the party of Thomas Jefferson is abusing the justice system and offices of public trust to silence political criticism with threats of prosecution and criminal punishment.

“This abuse of the law for intimidation insults the most sacred principles and ideals of Jefferson. I can think of nothing more offensive to Jefferson’s thinking than using the power of the state to deprive Americans of their civil rights. The only conceivable purpose of Messrs. McCulloch, Obama and the others is to frighten people away from expressing themselves, to chill free and open debate, to suppress support and donations to conservative organizations targeted by this anti-civil rights, to strangle criticism of Mr. Obama, to suppress ads about his support of higher taxes, and to choke out criticism on television, radio, the Internet, blogs, e-mail and daily conversation about the election.

“Barack Obama needs to grow up. Leftist blogs and others in the press constantly say false things about me and my family. Usually, we ignore false and scurrilous accusations because the purveyors have no credibility. When necessary, we refute them. Enlisting Missouri law enforcement to intimidate people and kill free debate is reminiscent of the Sedition Acts - not a free society.”

obama signs vandalized in california neighborhood (false flag?)
from raw replay: Authorities in Carmichael, California are investigating a rash of vandalism that has targeted Obama/Biden signs in one neighborhood. This video is from CBS 13 Sacramento, broadcast September 29, 2008.

thieves target obama yard signs in new york
from whec-tv: There is a theft ring in some parts of Monroe County. But these thieves aren't trying to break into your home, just your front yard. Dozens of Barack Obama lawn signs have been stolen in Brighton and Irondequoit. Others have been vandalized. Jane Bleeg stands at her living room window, dying to catch the person who keeps stealing her Obama signs... Police have been upfront with the supporters like Jane Bleeg, telling them it's not likely the suspects will be caught.

from worldnetdaily: Campaign contributions from Fannie Mae and Freddie Mac made to Barack Obama may backfire if the Democratic presidential hopeful wages an aggressive campaign to cast blame on rival John McCain and the Republicans in Congress for the mortgage-related losses that forced the U.S. Treasury to take over the quasi-governmental mortgage giants. A review of Federal Election Commission records back to 1989 reveals Obama in his three complete years in the Senate is the second largest recipient of Freddie Mac and Fannie Mae campaign contributions, behind only Sen. Christopher Dodd, D-Conn., the powerful chairman of the Senate banking committee. Dodd was first elected to the Senate in 1980. According to OpenSecrets.com, from 1989 to 2008, Dodd received $165,400 in Fannie Mae and Freddie Mac campaign contributions, including contributions from PACs and individuals, followed by Obama, who received $126,349 in such contributions since being elected to the Senate in 2004. 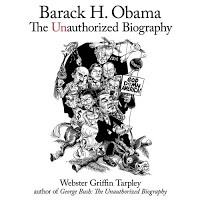 from progressive press: A massive, devastating exposé. Obama, a classic existentialist anti-hero, is utterly without principles – perfect for a career in the most corrupt turf in the USA, the Chicago political machine. Fraud and graft reach dizzying heights – his close cronies, the felons Al-Samarrae, Auchi and Rezko, have stolen hundreds of millions. Obama and his controller Zbigniew Brzezinski will take us to the cleaners like we’ve never been before.

obama vows to stop america's shitty jobs from going overseas
from the onion: In an appeal to working class voters, Barack Obama claimed his economic plan would save millions of backbreaking, mind-numbing shitty jobs.

obama’s ‘my muslim faith’ gaffe fuels new round of rumor-busting
from fox news: Barack Obama's campaign brushed off suggestions Monday that a verbal gaffe the Democratic candidate made during a weekend television interview is anything more than just that. In an interview Sunday with ABC's "This Week" host George Stephanopoulos, Obama tried to suggest that FOX News and others "closely allied" to Republicans are promulgating the notion that the Illinois senator is Muslim.

mccain attacks mika brzezinski as obama ’supporter’
from raw replay: MSNBC’s Joe Scarborough and Mika Brzezinski talked with John McCain about the accuracy of his campaign advertisements. McCain replied, “I know you’re a supporter of Senator Obama, if you would urge him to come and do town hall meetings with me as i’ve asked him to do time after time, the whole tenor of the campaign would change.” Brzezinski took exception to being labeled as an Obama supporter and reminded McCain that her brother works for his campaign. This video is from MSNBC’s Morning Joe, broadcast September 16, 2008.

(COMMENT: Actually, McCain may have a point here, since Mika’s father, Zbigniew Brzezinski, former National Security Advisor to Carter, is a top policy advisor for Barack Obama’s campaign. Though, for all I know, she supports/supported some other globalist puppet. But, it just goes to show how closely related the tightly-controlled propaganda-news wing is to the tightly-controlled two party dictatorship.)