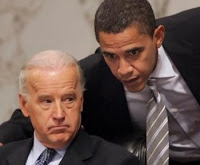 from michel chossudovsky: Obama's "American Promise" is War. Barack Obama has embraced the "Global War on Terrorism" (GWOT). The Obama-Biden campaign has endorsed the very foundations of the Bush administration's foreign policy agenda: "Go after Osama bin Laden, take him out". The rhetoric is softer but the substance is almost identical:

"For while Senator McCain was turning his sights to Iraq just days after 9/11, I stood up and opposed this war, knowing that it would distract us from the real threats we face. When John McCain said we could just “muddle through” in Afghanistan, I argued for more resources and more troops to finish the fight against the terrorists who actually attacked us on 9/11, and made clear that we must take out Osama bin Laden and his lieutenants if we have them in our sights. John McCain likes to say that he’ll follow bin Laden to the Gates of Hell – but he won’t even go to the cave where he lives." [APPLAUSE]

'the nation' & the obama campaign

from global research: The “special convention issue” of the Nation magazine features a lengthy article entitled “Progressives in the Obama Moment,” which seeks to make the case for those opposed to war and the reactionary policies of the Bush administration to rally behind the campaign of Democratic presidential candidate Barack Obama. The authors of the article engage in verbal contortions in an attempt to square the notion that Obama represents a progressive, anti-war impulse of far-reaching dimensions (“The Obama nomination sets the stage for a sea-change election”) with the plain fact that his actual policies are of a thoroughly conventional character and are well within the confines of the right-wing consensus of American bourgeois politics.

from lew rockwell: Politics brings out the worst in everyone, which is one good reason to completely depoliticize society. This way we can all busy ourselves in productive work or leisure, instead of wasting vast time watching these clowns on television promise the impossible to us. What we are being offered on television is two flavors of dictatorship. One party imagines Athens, with fairness and justice for all, international brotherhood and sisterhood, a world free of hate and discrimination in which all wealth is shared and no wealth is made at the expense of nature... Now to the Republicans, who imagine themselves creating a modern form of Sparta, with military strength and a disciplined citizenry unified in the drive to national greatness, courage, and heroism. Along with this comes support for national service (the draft) and a demand that Congress stop meddling in executive-branch matters.

video: obama strategists mark west virginia as 'battleground' state
from your4state: Fresh from the Democratic National Convention, Obama strategists have now fixed their eyes on West Virginia. During the primary season, presidential candidate Barack Obama suffered one of his biggest losses in the state of West Virginia. Now the Obama campaign is refocusing its efforts and labeling West Virginia a "battleground" state.

video: biden would prosecute bush officials if evidence exists
from raw replay: Fox’s Brian Kilmead talked with Joe Biden about Sarah Palin’s speech to the Republican National Convention. Kilmead asked Biden about reports that an Obama administration would prosecute officials in the Bush administration. This video is from Fox’s Fox & Friends, broadcast September 4, 2008.

biden denies: 'no one's talking about pursuing bush criminally'
from raw story: The possibility that Barack Obama might seek to bring criminal charges against President Bush or members of his administration has been a recurring theme during the presidential campaign, especially since the Obama campaign has attempted to stress themes of bipartisanship. For that reason, Democrats have been quick to downplay any hints of possible criminal prosecutions.

biden: israel free to attack iran
from press tv: US Democratic vice presidential candidate Joe Biden says Israel can take any action against Iran without Washington's permission. "Israel has an absolute right to defend itself," Biden told The Jerusalem Post on Wednesday adding that "It doesn't have to ask us".

from guardian: Rupert Murdoch helped broker a "tentative truce" between Democratic presidential candidate Barack Obama and key News Corporation lieutenant Roger Ailes, the boss of Fox News Channel, earlier this year, according to the media mogul's biographer. Murdoch, the News Corp chairman and chief executive, was forced to court Obama after the rising star of US politics rebuffed his initial approaches, it is believed because of what he saw as the derogatory coverage of him and his wife, Michelle, on Fox News, according to Michael Wolff.

5 deferments kept biden out of vietnam
from ap: Democratic vice presidential nominee Joe Biden received five student draft deferments during the Vietnam War, the same number of deferments received by Vice President Dick Cheney, and later was disqualified from service because of asthma as a teenager.