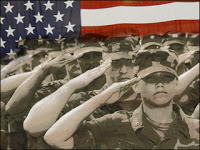 from komo: The Selective Service System is making plans to test its draft machinery in case Congress and President Bush need it, even though the White House says it doesn't want to bring back the draft.

The agency is planning a comprehensive test - not run since 1998 - of its military draft systems, a Selective Service official said. The test itself would not likely occur until 2009.

Scott Campbell, the service's director for operations and chief information officer, cautioned that the "readiness exercise" does not mean the agency is gearing up to resume the draft.

"We're kind of like a fire extinguisher. We sit on a shelf," Campbell told The Associated Press. "Unless the president and Congress get together and say, 'Turn the machine on' ... we're still on the shelf."

Veterans Affairs Secretary Jim Nicholson prompted speculation about the draft Thursday when he told reporters in New York that "society would benefit" if the U.S. were to bring back the draft. Later he issued a statement saying he does not support reinstituting a draft.

The administration has for years forcefully opposed bringing back the draft, and the White House said Thursday that policy has not changed and no proposal to reinstate the draft is being considered.