selling haarp to the pentagon 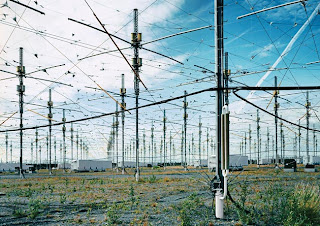 Noah Shachtman writes, in a Wired article online, "Strange New Air Force Facility Energizes Ionosphere, Fans Conspiracy Flames", a superficial tale at times of how HAARP arrived at its full potential 30 acres full of antennas a "bionic forest" able to inject 3.6 megawatts of energy into the ionosphere*. The article redeems itself by providing nuggets of fact not seen elsewhere. Bernard Eastlund, a physicist who worked for Atlantic Richfield, an oil company with rights to natural gas under the North Slope, suggested using the gas to power an ionospheric heater in the mid-eighties, instead of worrying about the logistics of delivering the commodity to port. Radio scientists liked the idea of a new heater in Alaska. "In those upper latitudes, the ionosphere intersects with Earth's magnetic field and becomes scientifically interesting." The late former Senator Ted Stevens made room for federal funding of the High Frequency Active Auroral Research Program (HAARP) in the late eighties.

The selling point to win the Pentagon's favor is the idea ultralow-frequency waves could knock electrons out of their natural spin, sending them tumbling to the lower atmosphere. This would protect satellites theoretically, who are vulnerable to nuclear explosion. The research could only be done at the HAARP facility. "You could actually see the lightbulb flick on," says Ed Kennedy, a former Haarp program manager. "This was something Haarp could actually help solve." There is, also, a 30-page pdf file linked in the article, HAARP Joint Services Program Plans and Activities (1990), which is very readable and interesting!

*(Please note, Brooks Agnew, a physicist, while searching for oil in Oregon in the eighties, identified what was below ground with high accuracy with just 30 watts of radio power.)