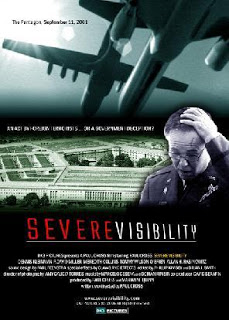 from 9/11 blogger: The morning of September 11, 2001, Paul Cross was at the White House for part of the post-production work of his film “Follow the Leader,”a documentary about the everyday life of the President of the United States. On September 12th Paul visited the Pentagon. He saw that the damage to the building, the debris and the scene were not consistent with the official claim that a Boeing 757 had crashed there. He finished producing “Follow the Leader,” which won an award at the Atlantic City Film Festival for best documentary, and traveled with the film, speaking about it.

Paul has a deep reverence and love for this country and the ideals it proclaims. When the truth of 9/11 hit him, he cried for days. “Severe Visibility,” his latest film, is his response. It tells the story of Major Stanley Kruter (played by Paul Cross) who was injured in the Pentagon attack. The other major character is a foreign journalist who begs Kruter to tell him about what he witnessed from his window during the attack. Paul said he created Major Kruter to represent the average American who believes in “America,” but that he identified with the journalist, who doubts that a commercial 757 airliner actually hit the Pentagon.

I heard about Paul’s film from a mutual banjo-playing friend last July, in 2006. Thrilled that a Hollywood feature 9/11 Truth film was being made, I phoned Paul. We had a friendly conversation. I sent him a copy of my DVD, but though he promised to send me a review copy of his film, for months I heard nothing from him. In April he emailed me:

“I feel like I am in Nazi Germany the way some people in Hollywood are reacting to it. What is everyone so afraid of? Everyone seems to like the film but I have been told by most of the distribution companies that I have approached that they are corporate and therefore don’t want to release a film with so strong a statement.”