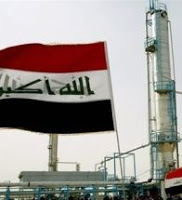 from raw story: Royal Dutch Shell oil company and the Iraqi Oil Ministry have struck a secret, as-of-yet non-binding agreement that gives a monopoly over southern Iraq’s natural gas to the energy giant. It marks the first time in over 35 years a Western oil company has played a major role in the country’s most lucrative industry. Signed Sept. 22 and obtained by United Press International, the “Heads of Agreement” document – basically a legal framework for a contract – delegates Shell sole access to the reserves for the next 25 years, with an option to extend that term. Shell says the arrangement gives it exclusive rights to all natural gas runoff produced by oil exploration operations in the southern portion of the country. However, like so many other major industrial contracts coming out of Iraq, the process used to reach an agreement is being questioned.