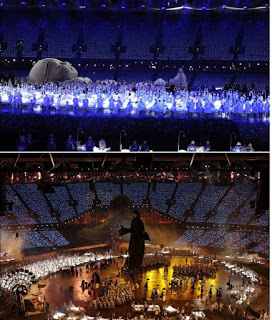 Zen Gardner wants to remind readers before it disappears into memory hole,"we saw the occult Olympic ceremony for what it was."  Gardner adds "then they just shut up about it." The Open Scroll Blog  takes it a step further with analysis of ceremony with creepy baby (picture, top) by Bob Schlenker!  The Olympics broadcast in America excluded any mention of Zeus as it was filtered out completely.  The ceremony, is simply, to honor and exalt Zeus, according to Schlenker, who half-jokingly adds, " most Americans are happy to worship Satan and his pantheon of gods, but just don't call him that." Schlenker, simply believes, it's an occult mega-ritual towards the birthing of the Anti-Christ!  Please check out complete breakdown of symbolism in "Part 32 - 2012 London Olympics - One Creepy Baby, in a Zeus Free Zone?" Hats off to a great talent in Schlenker!