sir kennedy in violation of the constitution? 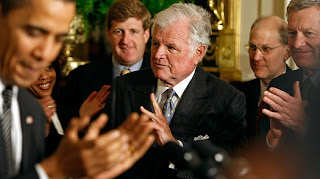 from brainflation: I attended the Health Care Forum down at the Coast Guard Academy today. Overall it was about what I expected, much hot gas was released but no cogent ideas were formed. While I didn’t get the opportunity to unleash my health question trifecta on Dodd during the forum I did catch up with him afterward. I asked Mr. Dodd when Congress authorized Senator Kennedy to receive his honorary knighthood from England. He honestly enough told me that no such authorization came out of congress. When I then informed him that Senator Kennedy is in violation of Article I section 9 of the Constitution and asked when the Senate intended to remove Kennedy he had only laughter. It is clear that Senator Dodd has no interest in upholding his own oath to defend the Constitution in response to Senator Kennedy’s violation of his oath of office and the Constitution. It is obvious that we need to get rid of this clown because he has no intention of ever doing what he was elected to do, uphold the constitution. From Article I Section 9: “No Title of Nobility shall be granted by the United States: And no Person holding any Office of Profit or Trust under them, shall, without the Consent of the Congress, accept of any present, Emolument, Office, or Title, of any kind whatever, from any King, Prince or foreign State.” [ed: but, was this article ratified?] 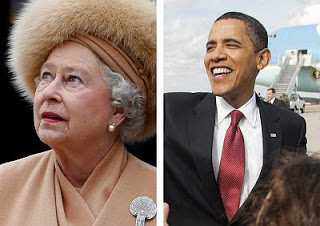 from bbc: President Barack Obama is to meet the Queen for the first time in April, the BBC understands. The private visit is due to take place at Buckingham Palace when the president visits Britain to attend the G20 London economic summit. World leaders are meeting at the G20 in London on 2 April to discuss plans to tackle the current economic crisis. The Queen’s last meeting with a US president was with George Bush during his farewell European tour last June. The BBC’s royal correspondent, Peter Hunt, said: “This will be a brief but striking encounter between an American president who’ll have been in power for some 70 days and a British monarch who has lived through the Second World War, the Cold War and the current terrorist threat.”

and, of course, gordon ‘new world order‘ brown just stopped by to check on his colony…

One response to “sir kennedy, obama, the constitution & the crown”