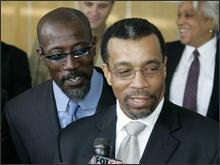 from seattle p-i: Wesley Snipes was released on $1 million bond after pleading not guilty to federal charges including falsely claiming millions of dollars in tax refunds, two months after he was indicted in central Florida.

The actor, known for films such as the "Blade" trilogy, didn't speak at a court appearance in Ocala on Friday. He went there after arriving in Orlando on a private jet from the African nation of Namibia, where he was filming "Gallow Walker," his publicist said.

"I look forward to clearing my name and resolving this issue posthaste," Snipes, wearing blue tinted glasses and a suit, said after the hearing. He didn't comment further.

Snipes, 44, was charged in October with fraudulently claiming refunds totaling nearly $12 million in 1996 and 1997 on income taxes already paid. He was also charged with failure to file returns from 1999 through 2004. If convicted, he faces up to 16 years in prison.

He will be allowed to return to Namibia to finish the film, but must return to his home in Marina del Rey, Calif., by Jan. 10, U.S. Magistrate Gary Jones ruled.

After that, he will be required to surrender his U.S. passport and will be restricted to traveling in the continental United States. A Feb. 22 status conference was scheduled, which Snipes isn't required to attend.

"We believe the evidence in the case will show he has been the victim of unscrupulous tax advice. And this trial will help vindicate him," said Billy Martin, Snipes' lawyer.

"Gallow Walker," a cowboy movie, will be completed next week and will be released sometime next fall, said Ian Thompson, spokesman for Sheer Films, which is producing the movie. Snipes' arrest wasn't expected to delay production, Thompson said.

Martin said Snipes left the United States to film the movie long before the indictment.

"We want to make it clear that he did not avoid returning to the United States. He's always been ready to return," Martin said.