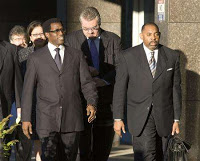 lawyers face off at start of snipes tax fraud case

from reuters: Defense attorneys clashed with the prosecution on Wednesday in Wesley Snipes' tax fraud trial over whether the actor conspired with a longtime tax protester to defraud the government of millions of dollars. The star of the "Blade" movie series has been charged with six counts of failing to file tax returns, two of fraudulently claiming tax refunds and one count of conspiracy to defraud the government. He faces up to 16 years in prison. Also on trial are Eddie Ray Kahn, a known tax protester, and a former accountant, Douglas Rosile.
flashback: wesley snipes pleads not guilty in tax case

diane keaton swears on tv & the fcc stammers
from reuters: The nation's top TV regulator said it would be difficult for the Federal Communications Commission to take action against ABC stations that aired "Good Morning America" on Tuesday when actress Diane Keaton used the f-word. 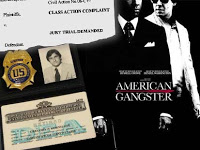 from abc: ABC News has learned that a group of former federal drug enforcement agents has filed a class-action lawsuit against NBC Universal today, asserting they were defamed by the blockbuster flick "American Gangster." As the final credits roll on the flick starring Denzel Washington as Harlem drug thug Frank Lucas, a screen appears that states three-quarters of the drug enforcement agents assigned to New York were convicted as a result of Lucas' cooperation with "outcast cop" Richie Roberts, portrayed by Russell Crowe in the movie. There were no such convictions, Drug Enforcement Administration officials told ABC News. But the agency had no immediate reaction when told of the lawsuit.

ap wants to know everything about britney
from new york times: The Associated Press is bolstering its entertainment news coverage — and for many readers and viewers, Britney Spears is nothing if not entertaining. An internal memorandum from The A.P.’s Los Angeles bureau dictating coverage of the troubled pop star was published by several media blogs... While not directly related, the renewed interest in Ms. Spears comes as The Associated Press is putting new emphasis on entertainment coverage. Mr. Ferrara said the news service’s clients — more than 1,500 daily papers and thousands of other media outlets — were yearning for more photos and videos of celebrities.