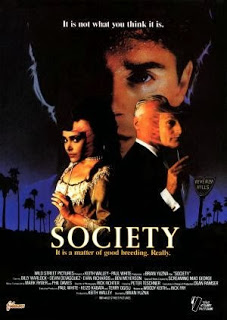 Wow!  Does 1989 film "Society" represent predictive programming?  Why else would this particular mythical horror be shown repeatedly to the public?  Is it similar to representing demons as aliens to take edge off "naked shock" of initial reactions?   A 2009 post, "The Dark Side of Society – Elite Satanism in the movies," shares interesting - even fascinating - facts about film.  "Society" will remain however, in post's own words, "... a disturbing celluloid sickfest that will haunt your mindscape for many years to come." One of the interesting insights, "Co writer Woody Keith came from a wealthy Beverly Hills family (possibly a satanic family) and some of the characters in the film are based on people he knew. It’s interesting that the original script ending was a blood sacrifice..." The mythos behind "Society" viewers may already know, "Brian Yuzna explains in the Directors commentary the ‘mythology’ behind the movie and the origins of the ‘Society’ families who are not a human race. His take is that way back in the times of cavemen a parallel evolution took place, creatures infected some of the ancient humans which gave them power to rule over and dominate other humans, these ‘blue bloods’ interbred and became the wealthy ruling class (sounds familiar)." It seems indeed a small world, according to post, "Billy Warlock, the main actor, is named by Fritz Springmeier as an illuminati mind control programmer in his phenomenal expose ‘The Illuminati Formula Used to Create an Undetectable Total Mind Controlled Slave’." Wow!  Is that possibly why film succeeds because it shares a reality unfamiliar to most of us - but resides nonetheless in extremely affluent neighborhoods?

The elite tradition that lies behind "Society":

"In the film it is made clear that family members are initiated into ‘Society’ with a ritual sacrifice which involves group sex and incest. After Bill’s sister has been initiated into ‘Society’ (after the sacrifice) she is dressed in red, the colour associated with blood sacrifice. Another interesting point is Billy Warlocks character is raised from birth to be a sacrifice which is common in satanic/illuminati families..."

An Illuminati family name also dropped in movie, post informs: "...is Bill’s family’s surname, ‘Whitney’. The Whitney family is a prominent illuminati family that play a major role in the infamous Order of Skull and bones..." Well, as viewers, you're left to grapple with question, whether blue blood elites are truly shape-shifters?  You may rest with consolation of no longer feeling need to wonder why wealthy seem so odd!  They are a different species! You may watch "Society" for free - but suspend sense of good taste for the duration!