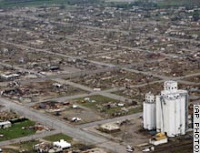 soldiers arrested for looting in kansas

from cnn: Four soldiers and a reserve police officer were arrested Sunday on suspicion of looting cigarettes and alcohol from a store in this tornado-ravaged town, state officials said.

In a separate incident, two people wearing Red Cross jackets who were not members of the relief agency were arrested Sunday on suspicion of looting, said Sharon Watson, a spokeswoman for the adjutant general's office. She did not have any additional details.

The soldiers from Fort Riley Army base and the reserve police officer had come to assist on their own and were not part of any official detachment, said Maj. Gen. Tod Bunting, the state's adjutant general.

"These were people who weren't supposed to be there," Bunting said.

Watson said the five were arrested at a Dillon's supermarket and were being held at the Pratt County Jail without bail. They have not yet been charged.

Watson said the five were in uniform, so police allowed them to come and go freely despite a town curfew. She said the officer was from a central Kansas community, but she was not sure which town...

Greensburg, a south-central Kansas town of about 1,500 people, was destroyed by a tornado that killed eight people in the town and injured scores of others.