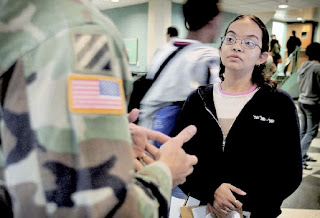 ‘soldiers of misfortune’: recruiting kids to serve in the military

from blacklisted news: In violation of its pledge to the United Nations not to recruit children into the military, the Pentagon “regularly target(s) children under 17,” the American Civil Liberties Union (ACLU) says. The Pentagon “heavily recruits on high school campuses, targeting students for recruitment as early as possible and generally without limits on the age of students they contact,” the ACLU states in a 46-page report titled “Soldiers of Misfortune.” (540kb PDF) This is in violation of the U.S. Senate's 2002 ratification of the Optional Protocol to the UN Convention on the Rights of the Child. Pentagon recruiters are enrolling children as young as 14 in the Junior Reserve Officer Training Corps (JROTC) in 3,000 middle-, junior-, and high schools nationwide, causing about 45 percent of the quarter of million students so enrolled to enlist, a rate much higher than in the general student population. Clearly, this is the outcome of underage exposure.