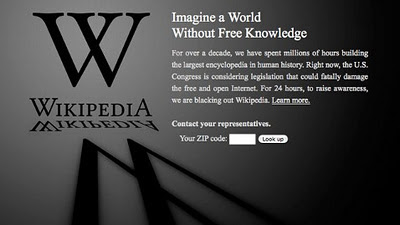 SOPA Is Back As Websites Go Black 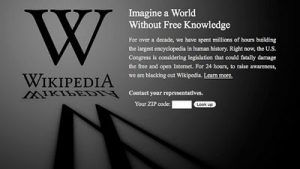 from geekosystem.com: It should come as no surprise that SOPA has come back off its proverbial 'shelf' but feel free to be surprised that it came back so fast. A mere 4 days after announcing he was dropping the DNS blocking provisions of the bill and putting it on the shelf until a 'consensus' was reached, Representative Lamar Smith has brought SOPA back out to play, and just in time for the January 18th SOPA blackouts.

4 days is awfully –impossibly– fast for a consensus of any kind to be reached, which is probably why Representative Smith avoided saying anything about his previous plans in this new statement. Instead, the new announcement states rather plainly that “[Smith] expects the Committee to continue its markup of the Stop Online Piracy Act in February.” In a similarly nonchalant fashion, the announcement proceeds to touch on your standard pro-SOPA talking points of saving American jobs, and protecting intellectual property, without so much as a passing reference to recent developments. It almost makes you wonder if you dreamt them.

So just when you may have been thinking that the anti-SOPA (but also anti-PIPA) blackouts being undertaken by Wikipedia, Reddit, Cheezburger, Mojang, and others were going to be oddly misaimed, it turns out that their primary target has been brought back into the sights. The really interesting thing is that these protest may actually be what brought it back. When pressured with constant pleas against DNS blocking, in combination with a rather embarrassing instance of copyright infringement, Representative Smith seemed to have gotten a little flustered, enough so that he backed off DNS blocking. The problem is that backing off failed to fix the problem, which is why it seems he’s abandoned compromise.

With the continuing snowball of sites blacking out, culminating in an anti-SOPA demonstration by the Internet giant, Google, I think it’s very likely that Representative Smith has realized retreat will get him nowhere and that no mutation of SOPA will ever be acceptable. That being the case, what better option than to charge ahead at full speed? If the Internet at large is willing to take this much action to stop a bill that has been “shelved,” taking time to reach a consensus will do little more than buy time for SOPA to be neutered beyond recognition, perhaps out of existence. Its best shot at survival - albeit a poor shot - is a mad dash towards the gates, in the hope that it can make it through before sustaining any further, crippling injuries.

The good news is that this resurrection is more of a last resort than anything. A desperate measure. The bad news is that it also means SOPA is back, and likely with a vengeance. Hold onto your seats, ladies and gentlemen, this ride is going to get a whole lot bumpier before it slows down, if it ever does.