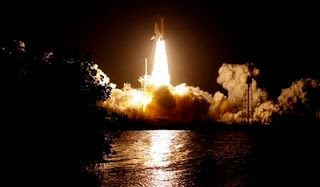 from ap: Seven astronauts raced to the international space station aboard space shuttle Discovery on Monday, while NASA debated whether the orbiting outpost will need to move aside to dodge part of an old Soviet satellite. Space station astronauts had a close call last week with a small piece of orbiting junk, and NASA said Monday that debris from a satellite that broke apart in 1981 could come within about half a mile of the station early Tuesday. NASA will decide later Monday whether to fire the space station's engines to nudge the complex out of the path of the debris.

debris near space station was bigger than reported
from reuters: The piece of orbital space junk that forced three astronauts to briefly evacuate the International Space Station on Thursday was bigger than originally reported, NASA officials said on Friday. The object, identified as a piece of rocket engine that flew in 1993, was about 5 inches in diameter, not .35 inches. Had it struck one of the pressurized modules aboard the $100 billion space station, the crew would have had only 10 minutes of air, said NASA spokesman Kelly Humphries.

US military confirms it shot down iranian drone 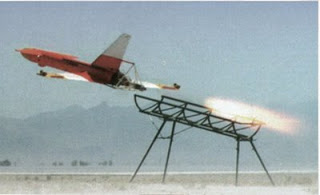 from danger room: Last month, a U.S. fighter aircraft tracked and shot down an Iranian drone. Details - first reported by Danger Room - have been elusive, but the U.S. military has now confirmed the incident. Multinational Forces Iraq spokesman Col. Scott Maw tells Danger Room that coalition fighters intercepted an Iranian unmanned aerial vehicle over Iraqi airspace on Feb. 25. The UAV, an Ababil-3 (pictured here), was "tracked as it crossed the border." Coalition aircraft were sent up to visually ID the drone. Finally, they did, and then shot it down "over 25 miles from the Iraq-Iran border." All told, the UAV was tracked "for an hour and 10 minutes before it was shot down." Maj. Gen. Abdul Aziz Mohammed Jassim, head of military operations at the Iraqi Defense Ministry, also confirmed the incident, telling Reuters: "An unmanned Iranian plane crossed the border and it was discovered by multi-national forces' radar. They intercepted it and brought it down ... an American plane brought it down." According to Jassim, the incursion was most likely a "mistake." Initially, coalition press officials would neither confirm nor deny the incident. But the presence of Iranian drones over Iraq — and the confirmation of the shoot-down — raise new questions about Tehran's unmanned aircraft capabilities and its intentions.