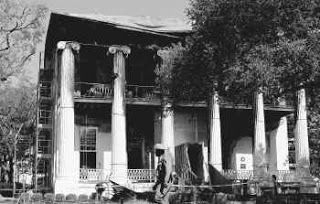 the strange case of the governor’s mansion fire

let's start at the beginning, here's the oldest report on google news from june 8...

from necn: Texas state officials say a four-alarm fire has caused "catastrophic" damage to the Texas Governor's Mansion in Austin. Governor's spokesman Robert Black says said no one was inside the 150-year-old home when the fire began shortly before 2 a.m. Sunday. He says the cause is not yet known. The mansion had been undergoing a $10 million renovation and Gov. Rick Perry and his wife had moved out last fall. Black says the damage to the mansion "is extraordinary, bordering on catastrophic." He says more than 100 firefighters are at the scene and the roof of the mansion is very unstable.

and then the mention of arson with the perry's conveniently out of town...

was governor's mansion fire arson?
from ap: Fire investigators are asking for the public's help in identifying who may be to blame for a blaze that badly damaged the historic Texas Governor's Mansion.

and then contradictions & controversy...

from news8austin: Officials received the first 911 call alerting them to the fire at the Governor's Mansion at 1:43 a.m., Sunday. Alonzo Perez made that call as he walked to his car from a night out on Sixth Street. The Austin Fire Department confirms Perez made the first call... "I didn't see nobody out here for about 8-10 minutes," Perez said. "It's kind of crazy. There was no security out here, nothing. I would think security would have been around here, you know." ... To hear the 911 calls, click here.

and then suspicion, conspiracies & on & on...

from paul joseph watson: A fire that gutted the Governor’s mansion in Austin Texas on Sunday morning has been confirmed as arson and authorities are studying evidence to help finger the perpetrator. Could the culprit turn out to be a 9/11 truther or anti-war demonstrator and conveniently give police the excuse to create a no-protest lockdown zone around a location that has become popular for demonstrations?

police stand down at governor's mansion 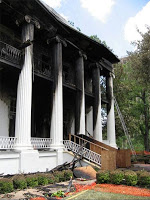 from mack white: As noted in my earlier blog posts on the Governor's Mansion fire, the failure of security is very strange to say the least. I have been a resident of Austin for over 30 years and am very familiar with the Capitol and Governor's Mansion area... Could the fire have been an inside job? Certainly, the failure by DPS to protect the building from arson has the look of a security stand down. But, until the BATF-assisted investigation and an arrest is made, we cannot know for sure. Time will tell...

from houston chronicle: An alarm system designed to alert state troopers if someone penetrated the walled grounds of the Governor's Mansion was not working when an arsonist torched the 152-year-old Texas landmark, sources familiar with the mansion's security said Friday. The system has been inoperative for at least four weeks, despite complaints by some Department of Public Safety troopers that it could imperil mansion security.