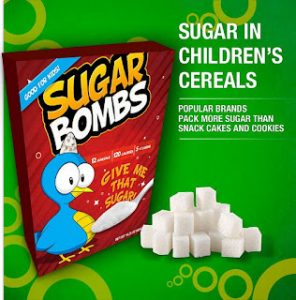 from cbsnews: A new study shows many breakfast cereals pack so much sugar, they’re more like desserts. For the report, the Environmental Working Group checked the content of 84 popular offerings, and says, “Kellogg’s Honey Smacks, at nearly 56 percent sugar by weight, leads the list of the 10 worst children’s cereals.” One cup of Kellogg’s Honey Smacks has more sugar than a Hostess Twinkie, and a cup of 44 other children’s cereals has more sugar than three Chips Ahoy! Cookies, according to the EWG.