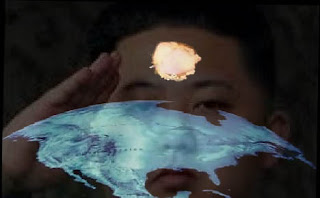 "'In 2004, the Russian generals told the EMP Commission that North Korea was getting help developing a Super-EMP nuclear weapon from contractors from Russia, China, Pakistan and elsewhere, and could probably test such a weapon 'in a few years.' A few years later, in 2006, North Korea tested its mysterious 'nuclear device' that produced an explosive yield of only several kilotons, and so was derided by the Western press as a failure--but hailed as a success by North Korea.'"

The 2006 test by North Korea presented in the media as a fizzled nuke, was in reality, a successful test of an EMP weapon.

It gets worse!  EMP devices may already be in orbit to be deployed over America as described below:

"During the Cold War, the USSR experimented with a secret weapon, the Fractional Orbital Bombardment System (FOBS), that used an ICBM like a Space Launch Vehicle to put a nuclear warhead into orbit, like a satellite. Instead of using the ICBM to lob the warhead on a more accurate arcing ballistic trajectory, flying along the shortest range to target, like an artillery shell, the FOBS lofted the warhead into a 'fractional' or partial orbit, sacrificing accuracy for limitless range.

FOBS could reach any nation or threaten any target anywhere on Earth.

A Super-EMP warhead does not weigh much, and could probably be delivered by North Korea's Fractional Orbital Bombardment System, successfully tested in December 2012, against any nation on Earth. Thus, North Korea already possesses an ICBM and poses a mortal nuclear threat to the United States, and to all nations on Earth--right now."

Readers may jump to conclude a clear threat and immediate danger! The present writer would implore to suspend judgement, an EMP attack will not leave any discernible signature to deduce culpability. What is going on here? Russia backing crazy Kim Jong Un threats to divide United States resources and diminish mission in Syria and Middle East?  Will threat provide cover for a false flag event?