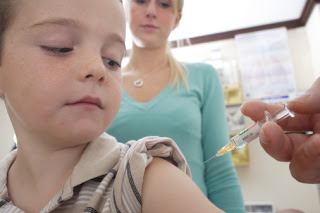 from paul joseph watson: The government is telling schools across the country to prepare to be used as clinics for mass vaccination programs set to be instituted later this year, according to an Associated Press report. Schoolchildren are being targeted as the first recipients of a swine flu vaccine currently being developed, despite the fact that swine flu has proven far less lethal than originally feared, killing just 160 people worldwide, a figure dwarfed by the number of people who die annually from the regular flu virus.

The World Health Organization increased the hysteria surrounding swine flu last week, raising their alert status to level 6, indicating a global pandemic was underway. “Schoolchildren could be first in line for swine flu vaccine this fall — and schools are being put on notice that they might even be turned into shot clinics,” states the report.

“Health and Human Services Secretary Kathleen Sebelius said Tuesday she is urging school superintendents around the country to spend the summer preparing for that possibility, if the government goes ahead with mass vaccinations.”

The last such mass vaccination program to combat swine flu in 1976 resulted in dozens of deaths and hundreds of injuries, after the Ford administration attempted to use the infection of soldiers at Fort Dix as a pretext for a mass vaccination of the entire country.

Americans have been psychologically conditioned by the mass media to accept to inevitability of enforced mass vaccination campaigns for years. The latest such example appeared in Time Magazine six weeks ago, where it was mooted that officials would be forced to “institute draconian measures to combat the disease,” measures which would include mandatory mass vaccination programs.

Some schools are already working with the government to run mass vaccination drills. Eleven schools in Alaska recently participated in an exercise focused around dispensing mass vaccinations in the event of an outbreak.