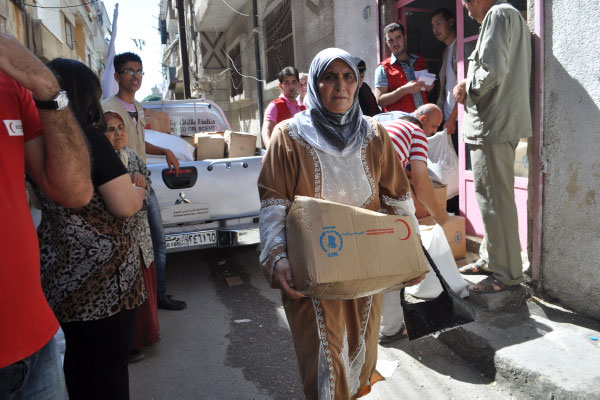 from reuters.com: Syrians in the capital Damascus are racing
against time to prepare for a foreign strike, with many hoarding
supplies and others scrambling to find accommodation further away from
potential military targets.

In a
city where dozens of military sites are mixed in among the civilian
population, many worry Damascus could become an especially dangerous
place should a Western-led strike come in response to the apparent use
of chemical weapons last week that killed hundreds in the suburbs.

At
grocery stores, shoppers loaded up on bread, dried goods and canned
foods, fearing they may face shortages if a strike hits the city. The
items most in demand were batteries and water.

Nearby,
a nurse idled in a clinic - empty as nearly no one showed up for their
appointments on Wednesday - and raised the question on the mind of so
many locals.

"We live in the capital. Every turn, every street, every neighborhood has some government target. Where do we hide?"

Syrians
have faced daily bloodshed and the constant threat of shelling and car
bombs in their country's 2-1/2-year civil war, which began as peaceful
protests against President Bashar al-Assad and has since killed over
100,000 people.

Now those who did not leave worry they have no place to hide.

"I'm starting to see the fear in people's
eyes," said one resident named Rula, speaking by phone. "People have
been in the habit of stocking extra food since the conflict began, but
now people are buying huge amounts of food and water."

Around Damascus, many banks were crowded with people, and dozens queued at cash machines.
Amid
the gloomy mood, some Assad loyalists tried to stir a sense of
patriotism. Hummers drove around the neighborhoods of central Damascus
blaring nationalist songs. Young people painted cement road blocks with
the Syrian flag.

On the capital's
outskirts, residents living in districts such as Hameh, Jumraya and
Qudsiya were especially nervous - they are the site of several military
research facilities and weapons caches, in addition to military bases.

Areas
surrounding Jumraya have been hit twice by Israeli strikes in the past
year. The second, in May, triggered dramatic orange-flamed blasts in the
night sky.

Zaina, from Hameh, said her family and many of their neighbors were packing their bags and looking to rent houses.

"They're
trying to get as far as they can from military sites. People are going
to places like Mashrou Dummar or the Old City - anything that is more of
a civilian area," she said.

Residents
say it is already getting harder and harder to find a place to rent.
Zaina said her family got lucky - a friend who had already emigrated
lent them his house in a safer area.

"But what about my friend?" she wondered. "Her whole family lives in this neighborhood. There is no place for them to go."