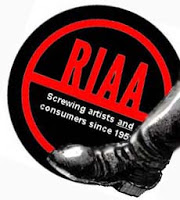 from slashdot: Fake cops employed by the RIAA started acting like real police officers quite a while ago — one of the earliest examples unfolded in Los Angeles in 2004. From a distance, the bust, ‘looked like classic LAPD, DEA or FBI work, right down to the black “raid” vests the unit members wore,’ said the LA Weekly. That their yellow stenciled lettering read ‘RIAA’ instead of something from an official law-enforcement agency, ‘was lost on 55-year-old parking-lot attendant Ceasar Borrayo.’ But it’s also SOP for the RIAA to wield genuine officers paid for entirely from citizen taxes as copyright cops. Police were used in an RIAA-inspired raid at two flea markets in Beaverton, Oregon. ‘Sgt. Paul Wandell, Beaverton police spokesman, said officers seized more than 50,000 items worth about $758,000,’ says The Oregonian. But this is merely the tiny tip of an iceberg of absolutely staggering dimensions, an example of the extent coming in a GrayZone report slugged RIAA Anti-Piracy Seizure Information.

at&t teams up with the riaa & mpaa to fight piracy 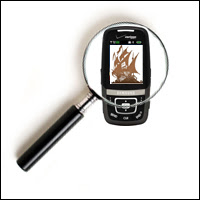 from zero paid: It seems AT&T Inc is joining forces with the MPAA and RIAA to keep pirated content off its internet network, making it the first ISP to do so, and perhaps heralding a new age where providers begin to police the content shared on their networks.

Many ISPs have been the frequent subject of criticism for not doing more to crack down on customers who download and shared pirated content illegally. They have, in the past, required court orders to single out customers whose IP addresses have been under scrutiny by the MPAA or the RIAA, never being proactive in this pursuit over fears of angering customers who could easily switch carriers.

For the first time an ISP seems to not care, actually joining forces with the MPAA and the RIAA “…to develop anti-piracy technology that would target the most frequent offenders, said James W. Cicconi, an AT&T senior vice president.”

The obvious reason would seem to be that it’s attempting to free up bandwidth resources, as P2P and file-sharing programs make up something like 2/3 of network traffic on average but, it seems that the real reason is to actually help defend its fledgling new cable TV service.

It recently launched a new cable TV service called U-verse in a handful of cities and neighborhoods across the country, and apparently has come to the realization that it too is now a content provider and so must take a stand against customers who would try to get content for free using its internet network.