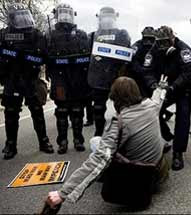 tens of thousands protest at the pentagon

from afp/raw story: Tens of thousands of protesters marched to the Pentagon's doorstep Saturday demanding "US out of Iraq Now," ahead of the fourth anniversary of the US invasion.

Demonstrators from across the United States gathered in a cold winter day to descend on the US Defense Department offices and decry the conflict that has killed more than 3,200 US soldiers and tens of thousands of Iraqi civilians.

Former US attorney general Ramsey Clark called for Bush's impeachment, while Cindy Sheehan, who lost a son in Iraq, demanded a US withdrawal.

"I marched in 1967 here," Maureen Dooley, 59, said outside the Pentagon, site of Vietnam war protests, but results were not immediate: "It took seven years to end the war."

War opponents trickled into Washington for the rally organized by the peace group ANSWER as Vietnam war veterans wearing black leather jackets gathered nearby for a counter-demonstration.

Some war supporters confronted the peace activists, tearing up and spitting on anti-war signs while chanting: "USA! USA!"

Washington police do not give crowd estimates, but an AFP correspondent said tens of thousands of people could be seen at the march.

War opponents have organized a series of protests against the conflict that started March 20, 2003.