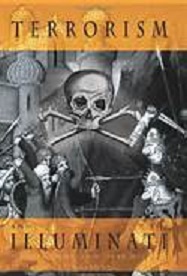 Your occult education will never be complete until you read "Terrorism Illuminati" by Robert Livingstone.  Your education cannot be more affordable, as you may download book (pdf) for free. The author first clears up Islamic terrorism connection for readers below:

"Contrary to myth being fabricated, Islam does not pose a threat to the West. Rather, Islamic 'terrorist' organizations have been created to serve Western imperialistic objectives. These groups are intertwined with Western power through a network of occult secret societies. This relationship dates back to sixth century BC, and the birth of the Kabbalah, in Babylon; a plot to seek world domination through the use of magic and deception."

"Livingstone says that all occult movements originate in the Cabala (which dates to 6th century B.C. Babylon.) Cabalism is a Jewish heresy because it does not uphold the universal moral standards enunciated by Moses....In this book, Livingstone deconstructed the myth of Western Civilization, which tries to portray progress in terms of the rejection of religion and the adoption of the secular, which is really a mask for the occult, i.e. the cabala and godlessness."

"...the Illuminati Order was preceded in the 1500's in Spain by the 'Alumbrados,' a Christian heresy started by crypto Jews called 'Marranos.' The founder of the Jesuit Order, Ignatius of Loyola, was a Marrano/Alumbrado. Thus when people today argue whether it is the Jesuits or Zionists who are responsible for our troubles, they are really talking about the same beast... The Sabbatean and Frankist heresies of the 1600's succeeded the Alumbrados and led directly to the Illuminati in the 1700's... Few works offer as much insight into the true character of the world we inhabit."

The present writer agrees with Makow's assessment book provides a highly objective assessment of driving forces behind Western Civilization!  Livingston born in Montreal, Canada, became a muslim but grew up an agnostic. It's an important book to likely broaden anyone's knowledge of history as well provide an instant boost to the reader's Occult Quotient!