firebombing leads to finger-pointing, but not at suspect 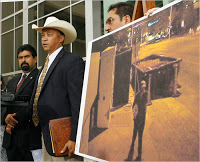 from new york times: It has been nearly eight weeks since someone tossed a Molotov cocktail over the wall of the Governor’s Mansion here, and the Texas Rangers seem no closer to finding the culprit than they did on the day of the fire, which gutted the historic landmark. Indeed, the whole episode is beginning to be an embarrassment to the state police and, more specifically, to the Texas Rangers, who see themselves as something akin to Scotland Yard, except on horseback.

Finger-pointing is rampant. A longtime director of the Texas Department of Public Safety, Col. Thomas A. Davis Jr., resigned a week after the fire under heavy criticism from a citizen’s commission that oversees his department. Then officials this week made public an internal state police report showing that security at the mansion – which was unoccupied and undergoing renovations when the fire broke out – was inadequate, to say the least…

“It was really the gang that couldn’t shoot straight,” said Harvey Kronberg, a columnist and the owner of The Quorum Report, an online journal that chronicles the capital’s doings.