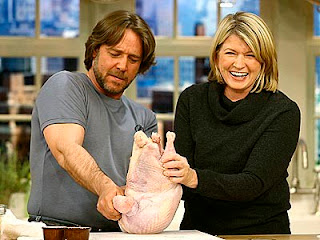 from foodsafetynews.com: Celebrity chef Martha Stewart came down with a Salmonella infection in late November, reported the New York Post this week.

Stewart was forced to cancel a number of post-Thanksgiving engagements due to her illness.

“It really hit me hard and I was in bed for days. It was terrible,” she told the Post.

While the source of her illness remains unclear, Stewart said the bacteria likely came from one of the many turkeys she handled over the Thanksgiving season.

“I was on the ‘Today’ show, I did a number of other [Thanksgiving] appearances,” said the chef.

The star did say there was one thing to be thankful for after her illness.

“I lost some weight though,” she told the Post.