‘The Devil and the Jews’ 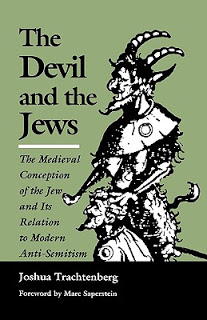 Henry Makow dedicates his website to defense of traditional values and Jews.  Makow strenuously argues traditional Jews suffer as much as gentiles from machinations of Illuminati Cabala (Kabbalah) Jews as they strive to dominate a New World Order. In article, “The Devil and the Jews,” Makow considers case of Rabbi Joshua Trachtenberg, whose study of Jewish antipathy towards wider Medieval Christian culture goes beyond preserving identity and economic relations.  Trachtenberg examines powerful Medieval superstitions, literally, fear of Jews as masters of alchemy and sorcery!  You have to give Makow credit for attempting to see how Jews might be viewed by wider culture.  “‘The catalogue of alleged Jewish crimes
is long and varied indeed, and wholly unreasonable.'” writes
Trachtenberg, ‘unless we accept the self-evident fact that, in medieval
eyes, that as Satan’s agents, nothing was beyond the depraved and evil
nature of the Jews’…Trachtenburg provides a litany of Jewish activities in the Middle Ages which suggests many age old ‘stereotypes’ have deep roots,” explains Makow in article.  The author goes further however, to elucidate, it’s Illuminati Jews, who should be ascribed role as Satan’s agents.  “Illuminati (Cabala) Jews and their Masonic henchmen don’t want Jews or others to understand the hidden subversive and occult character of the collective Jewish enterprise…They don’t want Jews to understand that anti-Semitism throughout the ages was not irrational. This realization would empower Gentiles, and allow ‘the lesser brethren’ to escape their role as dupes, scapegoats, human shields and human sacrifices for their demented leadership.”

Makow shares his view of the world in conclusion: “Illuminati Jews have waged a covert war against man and God…This conspiracy is the real history of the world, the real cause of war and depression. Society has been subverted…Even Jews like Trachtenberg, writing in 1943, can’t believe it. ‘People will believe whatever they want,’ he says referring to ‘anti-Semites’ but this also applies to him. Ordinary Jews can’t believe it because they are not Satanists. But many Cabalist Jews are.”