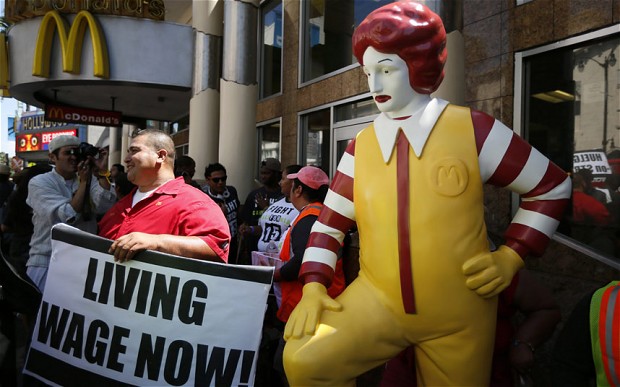 The Fat Cats of Fast-Food

from consortiumnews.com: Pay inequity has worsened across the U.S. economy, but perhaps nowhere more than in the fast-food industry where CEOs and other top executives fatten their compensation as their fast-food workers subsist on taxpayer-provided food stamps, as Michael Winship explains.

Bad enough that the empty calories of many a fast-food meal have all the nutritional value of a fingernail paring. Even worse, the vast profits this industry pulls in are lining the pockets of its CEOs while many of those who work in the kitchens and behind the counters are struggling to eke out a living and can’t afford a decent meal, much less a fast one.

Yes, you have heard this before. Over the last year or so, you’ve probably seen news coverage of the strikes and other job actions fast-food workers have taken against their employers. Maybe you’ve even read about the wage theft lawsuits that have been filed against McDonald’s and Taco Bell, or the recent settlements in New York State against McDonald’s, Pizza Hut and Domino’s Pizza that have led to payments to employees of more than $2 million.

But, much in the way that Thomas Piketty’s book Capital in the Twenty-First Century lays out the hard data backing up everything we’ve believed about the reality of vast income inequality in America, a trio of new reports confirms with solid statistics what we’ve suspected about the fast-food industry — that those in charge are gobbling up the profits voraciously while their workers are forced into public assistance. What’s more, our tax dollars are subsidizing both the fast-food poor who need the help and the fast-food rich who don’t.

First, a recent data brief from the National Employment Law Project (NELP) notes, “Lower-wage industries accounted for 22 percent of job losses during the recession, but 44 percent of employment growth over the past four years. Today, lower-wage industries employ 1.85 million more workers than at the start of the recession.” In other words, as The New York Times more succinctly put it, “The poor economy has replaced good jobs with bad ones.”

Michael Evangelist, author of the NELP report, told the Times, “Fast food is driving the bulk of the job growth at the low end — the job gains there are absolutely phenomenal. If this is the reality — if these jobs are here to stay and are going to be making up a considerable part of the economy — the question is, how do we make them better?”

A study from the public policy and advocacy group Demos, Fast Food Failure, confirms that, “The fast food industry is… one of the highest growth employers in the nation” but needs to address “imbalanced pay practices in order to mitigate the damaging effects of income inequality.”

The numbers are stunning. According to Demos, “In 2012, the compensation of fast food CEOs was more than 1,200 times the earnings of the average fast food worker. Proxy disclosures recently released by fast food companies reveal that the ratio remained above 1,000-to-1 in 2013.”

The average fast-food CEO made $23.8 million last year, four times what the average was in 2000, while fast-food workers “are the lowest paid in the economy. The average hourly wage of fast-food employees is $9.09, or less than $19,000 per year for a full-time worker, though most fast-food workers do not get full-time hours. Their wages have increased just 0.3 percent in real dollars since 2000.”

That $19,000 is below the “poverty threshold” for someone supporting a family of three, and on average, fast-food workers actually make less than $12,000 because they don’t get called into work for a full 40 hours a week.

The Demos report also cites numbers from a University of Illinois/University of California-Berkeley analysis that “87 percent of front-line fast food workers do not receive health benefits through their jobs. Since fast food employers do not pay for the critical needs of low-wage workers and their families, public programs foot the bill.

Which brings us to the third report, this one from the progressive Institute for Policy Studies (IPS) and titled, Restaurant Industry Pay: Taxpayers’ Double Burden. Double burden because in addition to the money in food stamps, Medicaid and other government assistance impoverished fast-food workers need to survive, taxpayers also are underwriting CEO compensation.

What? The IPS report explains that it’s pulled off by means of “a loophole that allows all U.S. publicly held corporations to deduct unlimited amounts from their income taxes for the cost of executive stock options, certain stock grants, and other forms of so-called ‘performance pay.’ In effect, these companies are exploiting the U.S. tax code to send taxpayers the bill for the huge rewards they’re doling out to their top executives.”

IPS calculated the pay of the CEOs at the 20 largest corporate members of the National Restaurant Association — known as “the other NRA,” the restaurant industry’s multimillion spending lobbyist. Among those 20 are the CEOs of McDonald’s, Chipotle, Starbucks, Dunkin’ Brands and Yum! Brands, which owns Kentucky Fried Chicken, Taco Bell and Pizza Hut.

IPS discovered that over the past two decades, these executives “pocketed more than $662 million in fully deductible ‘performance pay,’ lowering their companies’ IRS bills by an estimated $232 million. That would be enough to cover the average cost of food stamps for more than 145,000 households for a year.” In fact, the bigger the executive payoff, the less the fast-food company pays in taxes. Talk about a Happy Meal. You want fries with that?

So going back to that question Michael Evangelist, author of the NELP report, asks — how can we make things better? For one, as IPS recommends, we can close the performance pay loophole. The Stop Subsidizing Multimillion Dollar Corporate Bonuses Act in Congress caps deductibility of employee compensation at $1 million, period.

This could generate $50 billion in revenues over ten years, according to the House and Senate Joint Committee on Taxation. And California Congresswoman Barbara Lee has introduced the Income Equity Act. It cuts off corporate tax deductions for any executive’s pay that’s more than 25 times the salary of the company’s lowest paid worker or $500,000, whichever is highest.

If you think that’s unprecedented, IPS points out that both the Affordable Care Act and the TARP bank bailout sets a $500,000 deductibility cap “on pay for bailout recipients and health insurance firms. The deductibility caps on health insurance firms, designed to discourage these corporations from using profits from premiums to overcompensate their executives, go into effect this year.”

Second, of course, raise the minimum wage, preferably to $15 an hour. As per the IPS report, “Minimum wage increase supporters highlight the potential stimulus effects of putting more money into the pockets of low-wage earners. Unlike those at the top end of the income scale, minimum wage workers tend to spend all of their earnings” — just to meet basic needs. “Every extra dollar that goes to a low-wage worker adds about $1.21 to the national economy. This economic stimulus would pump money into local economies and help create new jobs.”

Ultimately, though, it’s the companies that must take action. Yet some of their CEOs say they favor a wage hike but still allow the National Restaurant Association to continue doing their dirty work for them, lobbying fiercely, as they are right now in Congress against any minimum wage hike at all (this is the same gang that for more than twenty years has kept the minimum wage for tipped restaurant workers at a paltry $2.13 an hour).

Time for the CEOs to put their money where it counts, “to arrest the damage,” as that Demos report says, “from pay disparity and restore the focus on long-term interests of the firm.” Time to show some foresight, for as wages remain stagnant, purchases will go unmade, the health and wellbeing of workers will continue to decline and with that deterioration, the service and reliability on which the companies ultimately depend for profitability will crash as well.

If things continue as they are, the only thing fast about the fast-food business will be the speed of its fall.