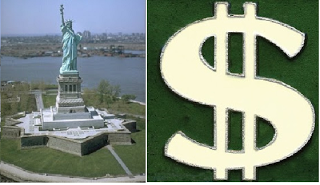 The Freemasonic Statue of Liberty

The Atlantean Conspiracy website (TAC) pulls veil from Lady Liberty to reveal her true identity as ancient Egyptian godess,"Isis."  It's time for Americans to know who Lady Liberty really represents. A brief article at TAC does masterful job informing reader:

"Did you know the Statue of Liberty was given to America by French Freemasons? There is another statue just like it in France on an island in the Seine. The character propagated as 'Lady Liberty,' supposedly derived from the Roman goddess Libertus, is simply a patriotic pseudonym for the public. Lady Liberty has been known throughout history as Isis of Egypt, Semiramis/Ishtar of Babylon, Athena of Greece, Astarte of Syria, Cybele of Rome, Ashtoreth of Israel, and Diana of Ephesus. She is the Pagan mother Goddess of the Brotherhood, nearly always depicted dressed in robe, wearing a crown of thorns, and carrying the torch of illumination."

"The symbol for the U.S. dollar is $, sometimes with one or two vertical lines. The 'S' and 'I' have nothing to do with 'dollars' and everything to do with 'ISIS.' The Egyptian Goddess of the Moon and Sirius was 'ISIS' and this is the most common name for her used by the Brotherhood. The dollar sign is actually an occult talisman to this Illuminati Goddess. This is why both the Statue of Liberty/Isis and her dollars are both the same color green."

The truth stands before us in New York harbor for those with "eyes to see ".   It's been there all this time.  You may view prior post,
"Is The Statue of Liberty Pagan?," for more info.