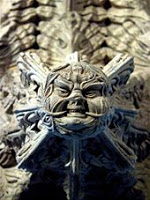 The Green Man of Rosslyn Chapel

The Green Man of Rosslyn Chapel provides another fine point of esoteric knowledge much like The Apprentice Pillar. "The 'Green Men' are carvings of human faces with greenery all around them, often growing out of their mouths. They are thought to be a symbol of renewal and fertility, pre-Christian in origin. In Rosslyn they are found in all areas of the chapel, with one example in the Lady Chapel, between the two middle altars of the east wall. There are more than 110 carvings of Green Men in and around the chapel," informs Wikipedia.