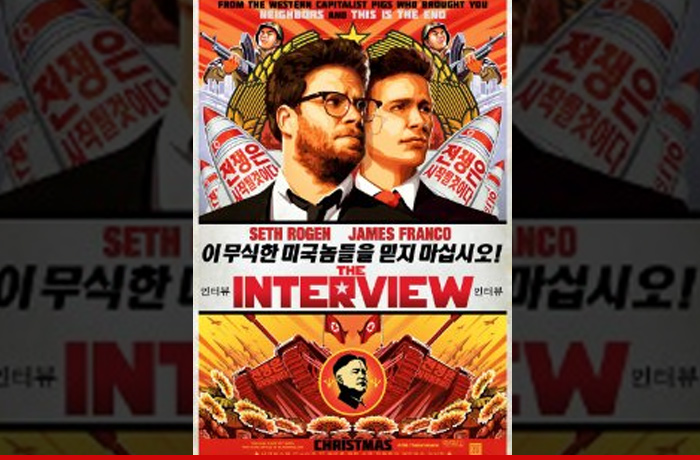 from RT.com: The premiere of ‘The Interview’, the comedy ridiculing the North
Korean leadership, has been canceled in New York, allegedly due to a
9/11-style terror threat. But US security officials say “there is no
credible intelligence” of an attack at this time.

The Sunshine Cinema in Lower East Side has made the decision to
cancel the Thursday showing.

Alarm over a possible attack was sparked by threats from the
group responsible for the infamous Sony Pictures hacks. They
started with releasing celebrity and executive emails and
financial details, but have graduated to a 9/11-style terror threat in the event the premiere takes place.

'The Interview' has already been blamed for its
political effects when the embarrassing Sony hacks began – an
angry letter from the North Korean leadership to the UN
Secretary-General Ban Ki-moon called it “an act of war.”

It was first thought the data leaks were all the work of
North Korea, as the timing appeared suspicious. And North Korea
earlier threatened “merciless retaliation” if the film
were ever released. Although North Korea praised the hack, it
denied involvement. The FBI confirmed this.

While the identity of the actual hackers is still being worked
out, the group now has a much more sinister message for Sony:
either the movie doesn’t air, or “we recommend you to keep
yourself distant from the places at that time.”

They mention the September 11 attacks on New York, causing a
visible panic among the public. “If your house is nearby,
you’d better leave,” the hackers added.

That is the main theory behind why the movie premiere was
canceled. Police departments in New York, as well as Los Angeles,
have been put on heightened alert, with officials promising to
make the following days as safe for moviegoers as possible.

But an official with the Department of Homeland Security says,
according to Reuters, that “at this time there is no credible
intelligence to indicate an active plot against movie theaters
within the United States.”


Sony had no comment on whether the threats are what caused the
cancelation. A spokeswoman for Landmark, the company that
operates the Lower East Side theater, also declined to comment.

According to testimony from a person familiar with the decision,
Sony said earlier it didn’t intend on canceling the showing, but
added that it wouldn’t object to movie theaters doing that. The
same source says Sony received a notice late Tuesday from a major
theater chain owner, Carmike Cinemas, that they were pulling the
movie.

But the movie is already making waves in different ways. Its main
stars, Seth Rogen and James Franco, have canceled all their
Tuesday appearances, and Rogen, the film’s co-director and one of
its writers, was reportedly prompted to make changes to the movie
because of its strong political overtones.

US law enforcement agencies are investigating who is responsible
for the hacking.