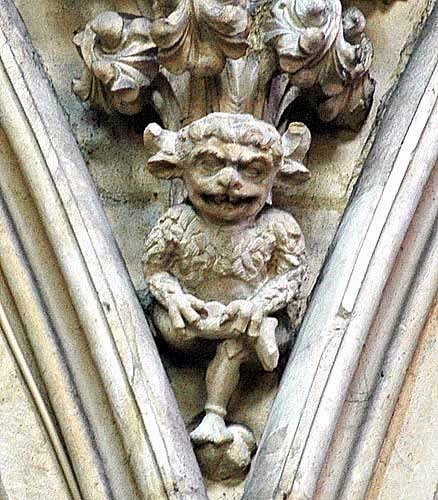 The Lincoln Imp is a stone figure at the Lincoln Cathedral in the town of Lincoln in England.

“The legend is that a small devil entered the Cathedral out of curiosity and plagued the Angels. To prevent further mischief they turned him to stone. If you prefer, as a very old legend has it, one day the devil sent his imps out to play, and the wind blew two of them all the way to Lincoln. At first they were so awestruck by the splendour of the Minster that they were afraid to enter. But soon one imp took courage, flew into the Cathedral where he tried to trip up the Lord Bishop, and to knock down the Dean and teased the Vergers and Choir. When he started to break windows the Angels told him to stop his wicked doings; he cheekily replied ‘Stop me if you can!’ Whereupon he was at once turned to stone and made to sit evermore in a cleft in the Angel Choir,” according to the Lincoln Cathedral website.

“Lincoln Cathedral was the first building to ever exceed the height of the Great Pyramid of Giza, thereby becoming the world’s tallest structure, and remaining that for more than two centuries until the collapse of the spire,” informs Sacred Destinations.


The occult significance of Lincoln Cathedral growing in public’s mind to rival France’s Rennes Le Chateau through writing of authors like Dan Green.