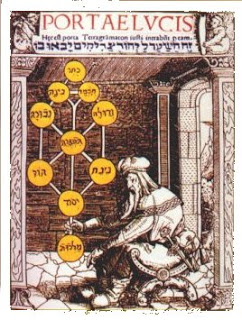 The Tree of Life

DCsymbols website describes The Tree of Life in Kabbalah:

"The chief symbol used by Kabbalists is known as the Tree of Life, and is made up of ten spheres (correlating to the ten arabic numbers 1-10), said to be connected by twenty-two 'paths' (correlating to the twenty two Hebrew letters- see Psalm 119, 22 Tarot Trump cards, 22 Chapters in the Revelation, etc.). Here is a copy of the first publish- ed image [picture] of the Tree, on the frontpice of 'Portae Lucis' ('Gates of Light', a Latin translation from Hebrew, 1516)."

"While Kabbalistic legends are multi-leveled, the simplest interpretation of the Tree of Life is that it depicts the Journey of the Soul, in the case of man, or the Divine Sparks, in the case of matter. The Kabbalah teaches that 'the world is an iradiation of God', that a divine spark lives in every thing and being, so that God can be beheld in everything. This is an optomistic view which sees the cosmos as a theophany, a manifestation of divinity."

"...Remember that in the Kabbalah, this is a round trip, an exile from, and a return to Paradise. The imagery of a ladder is perhaps the most commonly used metaphor for this, as in the story of Jacob from Genesis 28:12, 'And he dreamed and behold a ladder set up on the earth; and the top reached to heaven: and behold the angels of God ascending and descending on it. This is none other but the house of God, and this is the gate of heaven". And Jacob named the place that 'was called Luz at first', Bethel (the house of God; Beth = house, el = of god)."

Wikipedia provides a nice description of the 10 sephirot (1-10) of Kabbalah.