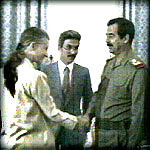 from wikipedia: The Invasion of Kuwait, also known as the Iraq-Kuwait War, was a major conflict between the Republic of Iraq and the State of Kuwait which resulted in the 7 month long Iraqi occupation of Kuwait[4] which subsequently led to direct military intervention by United States-led forces (see Gulf War).

The invasion started on August 2, 1990 and within two days of intense combat, most of the Kuwaiti Armed Forces were either overrun by the Iraqi Republican Guard or escaped to neighboring Saudi Arabia.

here is a quick video from the history channel... and don't forget about april glaspie and the US's permission to invade kuwait.