from guardian: Pro-Tibetan protesters today disturbed a high security ceremony to light the Olympic flame in Greece. International dignitaries were gathered at Olympia, the site of the ancient Olympics, when three members of the Paris-based Reporters Without Borders ran onto the field to disrupt a speech by Liu Qi, president of the Beijing organising committee and Beijing Communist party secretary. The demonstrator who got nearest to Liu Qi was carrying a banner showing the Olympic Rings as handcuffs but failed to unfurl it before being arrested. 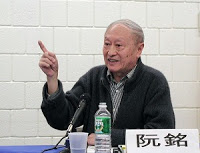 from paul joseph watson: A former Chinese Communist Party official has accused China of staging violent riots in Tibet in order to demonize Tibetans in the eyes of the international community, justify a brutal paramilitary police crackdown and force the Dalai Lama to resign. Ruan Ming, who was a speechwriter for top CCP officials during the 80's, now lives in Taiwan and serves as diplomatic advisor to President Chen Shui-bian. During his time in the Communist Party, Ming was admired by democracy activists as a reformer. In an interview carried on the Epoch Times website, Ming warns that the Chinese government is orchestrating some of the more violent riots in an attempt to demonize peaceful Tibetans and justify a greater crackdown. He blames the Chinese Communists for violence witnessed during the riots in Lhasa on March 10th and argues that a wider agenda is unfolding.

from paul joseph watson: Britain's GCHQ spy agency has confirmed the fact that Chinese People's Liberation Army agents posing as monks staged violent riots in Tibet in order to justify a brutal crackdown, but that the demonstrations have now escalated beyond Beijing's control. According to a report in today's Epoch Times, "GCHQ analysts believe the decision was deliberately calculated by the Beijing leadership to provide an excuse to stamp out the simmering unrest in the region, which is already attracting unwelcome world attention in the run-up to the Olympic Games this summer."