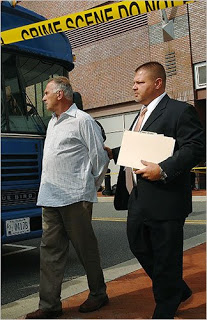 from examiner: New Jersey top government officials and religious leaders, according to MSNBC, have been arrested in connection with a supposed "major corruption and international money-laundering conspiracy." Reportedly it was also discovered that many were involved in a black market organ ring. Among those arrested are two New Jersey mayors, an assemblyman, and a city deputy mayor. Several law enforcement agencies, including the FBI and the IRS, are said to be involved in this sting operation that has resulted in approximately 30 arrests. This is a breaking story so details are still minimal. But what has been said so far is that the mayors of Hoboken, Peter Cammarano, and Secaucus, Dennis Elwell, have been arrested. Also included in the arrests were Jersey City Deputy Mayor Leona Beldini, state Assemblyman Daniel Van Pelt, and some rabbis from New York and New Jersey.