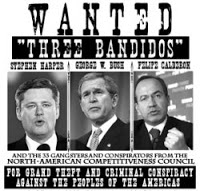 from vancouver24: Could Canada’s Games be secured with help from Americans and Mexicans?

Canada, U.S. and Mexico are planning a massive joint military exercise in April 2009 “to focus on terrorist events that could affect [the] 2010 Olympics,” according to Public Safety Canada documents released to 2010 Watch via access to information.

The rehearsal, led by the U.S. Department of Homeland Security, is code-named TOPOFF 5. Canadian troops were among the 15,000 participants involved in last October’s TOPOFF 4 in Portland, Ore., Phoenix, Ariz. and Guam.

An undated Public Safety Canada report said up to $22.8 million was needed to fund emergency management, counter-terrorism, cyber security and critical infrastructure protection exercises, “leading to a trilateral full-scale exercise prior to the Vancouver Olympic Games in 2010, as outlined under the Security and Prosperity Partnership.”

SPP was founded in 2005 to promote economic growth and enhanced security in North America.

“Does it mean that if the American forces are training with Canadian forces that they are going to be positioned here in Canada during the period of the Olympic Games?” said 2010 Watch’s Chris Shaw. “And, if so, under whose command?”