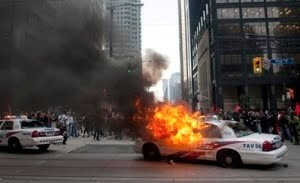 from raw story: Reporters covering the G20 summit in Toronto say they were the target of police violence overnight, as riots blamed on anarchist groups left four police cars burning in the financial district and resulted in the arrests of some 150 people.

"A newspaper photographer was shot with a plastic bullet in the backside, while another had an officer point a gun in his face despite identifying himself as a member of the media," reported the Canadian Press news agency. The agency did not say if it was its own reporters who were targeted.

In a remarkable series of Tweets early Sunday morning, journalist Steve Paikin of public broadcaster TV Ontario said he witnessed "police brutality" against a reporter and the arrests of peaceful demonstrators.

"I saw police brutality tonight. It was unnecessary. They asked me to leave the site or they would arrest me. I told them I was doing my job," he Tweeted.