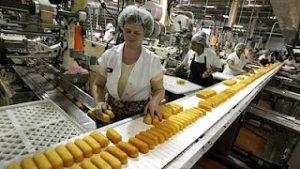 from nydailynews.com: For Hostess, there hadn’t been a lot to ‘ho ho’ about for a while. The maker of Twinkies and Wonder Bread, is filing for Chapter 11 bankruptcy protection for the second time in recent years, the Wall Street Journal reports. Those familiar with the company blamed the skyrocketing costs of flour, sugar and other key baking ingredients as well as snowballing debt. The company had attempted to get its finances together when it first filed for bankruptcy back in 2004. Since then, the embattled baker has been struggling with various investors to stay in the black. Hostess will likely attempt to renegotiate union contacts and find innovative ways to reduce debt. The company also suffers from its too-sweet image. People associate the brand with white bread and junk-food treats, according to WSJ. Its attempt at launching a whole grain line called Nature’s Pride has not succeeded in making a dent in the competition. The company was founded in 1930…it was called Interstate Baking Co.

One response to “Tough Times for Twinkies: Hostess Files for Bankruptcy”