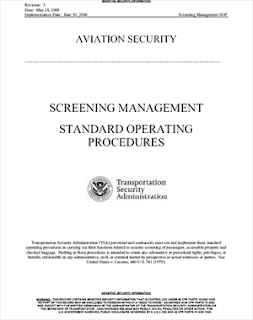 from kurt nimmo: Apparently the legal staff at the Transportation Security Administration are as clueless and inept as the guys who search you at the airport. The TSA released a manual for flight and other screening procedures and thought they had done a knock-up job on redacting certain sensitive areas.

Problem is they attempted to do this with a PDF editor and blew it big time. Instead of printing the document and marking out the areas by hand, they merely placed black boxes over the text in the editor. Call it laziness or stupidity. Either way, the boxes were easily defeated because they are not part of the document. Even a sixth grader with rudimentary knowledge of Acrobat or other PDF editors knows this.

Obviously, the factotums at the TSA need to read one of those Dummy books. It is another example of the kind of help the government hires. And these guys want to run health care?

The areas outlined in red were formerly redacted (click on the image above to download the unredacted document). No telling how long this document will remain on the WikiLeak servers.

At any rate, the document reveals a few things the feds don’t want us to know. For instance, Section 2A-2 (C) (1) (b) (iv) addresses which twelve passports will instantly get you moved to secondary screening. Other juicy details include the procedure for CIA-escorted passengers to be processed and the calibration process of airport metal detectors.

All good stuff al-Qaeda would want to know – that is if they actually existed.