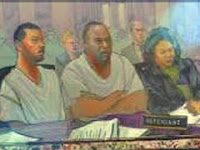 Leslie Adgar, 42, of Decatur, Andre Mays, 24, of Atlanta, and Jon Patton, 44, of Lawrenceville, pleaded guilty to smuggling cocaine and heroin.