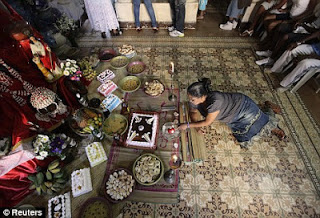 Mail Online article reports, “two human fetuses that were to be used in a ‘religious ceremony’ were found in luggage coming from Cuba by customs agents at Miami International Airport, according to police.” Two women reported sixty to seventy years old, were taken into custody by Customs when X-Ray of Jar revealed a fetus.  A second fetus was discovered after opening jar. The article informs, “…chickens (the most common), pigeons, doves, ducks, guinea pigs, goats, sheep, and turtles, and sometimes the use of old human bones stolen from cemeteries.Human fetuses are rarely, if ever, used, Santeria experts told the Miami Herald. A medical examiner determined both fetuses were about 20 weeks and both had been still born. No foul play was suspected.” Do you believe it?