ufos are not alien 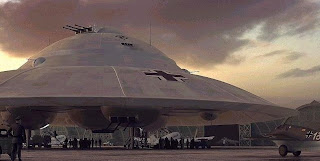 The Nazi UFO Mythos lives on in a recent article at The Sun, "Close Encounters of the Third Reich." The article takes the opportunity to report on Iron Sky, a movie about Nazi UFOs presently in production, to recount evidence for the real thing! "German engineer Georg Klein claimed two types of flying disks had been created by the Nazis: [1]A non-rotating disk developed by V-2 engineer Richard Miethe, was captured by the Russians. [2]The Schriever and Habermohl model. Klein claimed he saw this craft's first manned flight in February 1945 when it climbed to 40,700ft and reached 1,400mph. Klein, who went on to have a distinguished postwar career as an aeronautical engineer, said: "I don't consider myself a crackpot or eccentric or someone given to fantasies."

Martin Slade, author of book on Jonas Valley of central Germany, claims 174 saucers were developed there in an underground production site. "Research in Third Reich archives points to a secret factory in the Jonas Valley complex. Why else would the Americans take away everything they found and place the results under a 100-year secrecy order?"

Adolf Hitler wanted to bomb New York City, Nazi UFOs were part of the plan. Author Joseph P Farrell firmly believes also UFOs trace back to Germany and written extensively in support of the argument. The recent spate of articles stem from a report in a German science magazine, PM, but the belief is not new. The timing of first UFO sightings on the heels of World War II, makes it difficult to dismiss a Nazi origin for UFOs!

Iron Sky will consummate the complete myth in a movie. Nazis used their Antarctic base, Neuswabenland, as a jump off point to establish a base on the Moon's dark side, Schwarze Sonne and they are coming back in 2018! It's quite the myth!